I’ve read many accounts of people’s bowel cancer diagnosis and treatment and I’ve often been moved to tears. Their stories are heart breaking to read, but I find it very hard to relate to them because I didn’t go through such a traumatic experience. Not everyone has a heart breaking story to tell. My own experience of T3/N1 is one of hope and shows the importance of an early diagnosis.

Prior to my diagnosis on 9 February 2021 I had no idea I had any cancer. I didn’t feel unwell, I didn’t have any pain, I wasn’t experiencing dramatic (or any) weight loss, no blood in my stools. I did feel tired occasionally - which I put down to being 72, but apart from that I was ‘fit and well’ … or so I thought.

As I approached 72 I had my medication review with my GP in early January. I had been diagnosed with angina pectoris 12 years earlier, but it never really affected me (one visit to A&E in those 12 years since being diagnosed) and it was medically controlled and without incident. I was expecting a clean bill of health. Part of my review was a blood test and it was revealed I was lacking iron and a little anaemic. I was unaware of this. My GP arranged for a FIT test to check for blood in my stools. The test came back positive for blood and I was sent for a virtual colonoscopy, followed a while later by a CT scan, and finally, on 9 February I underwent a full colonoscopy. I didn’t like that, at all.

Some 30 minutes after the scan my wife and I were told I had bowel cancer. My wife told me she went icy cold from head to toe. I felt absolutely nothing. No hot or cold, no skipped heartbeat, no rush of adrenaline, no anxiety, absolutely nothing. I just calmly accepted it and simply asked the one question we all want to know, “how long have I got?” Of course, there’s no definitive answer but I was told it hadn’t spread and it could be surgically removed. From that moment on I determined to tackle this cancer head on. I wouldn’t let it define me, it wouldn’t be who I am. I treated it with respect and I used humour and honesty to see me through.

I went public on Facebook from the start and my family and friends knew what was happening as it happened. Even strangers sent me messages of support, some telling me they hadn’t even told their families of their diagnosis! Thereafter followed lots of appointments where everything was fully explained including the dangers of surgery, the ‘risk of death’ during surgery, and the morbidity rate (56%) following surgery. None of it was cheery stuff, but I just listened and prepared myself. Part of my preparation was to build up my strength. I began a campaign of three to four mile brisk walks, part of which was to scale Lindum Hill (a long and steep hill in my city) which got my heart and lungs racing (at first) until the day before my operation when I was much fitter and faster and simply ‘glowed’ as opposed to ‘gasped’. I augmented the walks with a Joe Wicks workout for seniors. I found it a little taxing to start with but, by the day prior to my operation, I was doing each exercise for twice as long. I was ready. Bring it on.

I came to terms with the three possible outcomes following surgery: wake up and all would be well, the cancer removed (my favourite), wake up with a stoma (second favourite), or not wake up at all (I really didn’t fancy that one!). On 14 April 2021, I had the operation. It went well. Phew! Recovery in the hospital was OK. After waking up I was a tad groggy and although not in pain, it did hurt when moving around - which is understandable after having keyhole surgery. They put me on a morphine drip for a couple of days, and then onto paracetamol - which I weaned myself off to one or two if needed, which they weren’t by my fourth day. I made good progress but I couldn’t be discharged until I’d broken wind and done two poos. It’s crucial the join in my intestines didn’t leak, hence the passing of wind and poo. Try as I might I just couldn’t get anything to pass out of my bum. Then, five days later, at 2am Sunday morning I farted, and at 7.30am and 8am I did a poo. I was so excited I just had to show the nurse on duty! She was delighted.

I was discharged at lunchtime and my recovery began. Monday I went for a walk around the block with my wife: 0.34 miles at 1.5 mph in 13 minutes. In fact it was more of a shuffle than a walk. The next day we went a little further, and on Wednesday we went 1.23 miles at 2mph in 36 minutes. The distance became further and the mph increased such that exactly one month later I did 3.5 miles at 3.5mph. Now it is four or five miles each time and the pace is averaging around 3.8mph.

According to those that know, my recovery has been remarkable for a man my age. Since five weeks post-op I’ve been almost back to normal. No painkillers since being discharged, no pain except a little soreness around the wounds, I’m able to stretch, bend, lift sensibly. In fact now, at 11 weeks post-op, it’s as if I never had cancer.

And now back to where I started this story. My story isn’t inspirational, it’s not going to bring a tear to anyone’s eyes. When I read stories about the suffering so many have gone through, many of them a lot younger than I, I feel guilty. I feel a fraud. I feel it’s unfair to others that I haven’t suffered. I truly believe my modest keep-fit regime made all the difference: that and my positive attitude. I never let it get me down, and I left all the worrying to my wife. I’ve been very lucky, I know that. I just hope that someone with a bowel cancer diagnosis has the same luck. I don’t want to be the one who sailed through it relatively unscathed, I want others to have the same experience - especially those my age.

A week or two after I was discharged from hospital following my bowel cancer surgery I asked the Surgical Unit if there was anything I could donate to show my appreciation. From admission to discharge I was surrounded by a team dedicated to my wellbeing. Each person working as a whole, each dependent on others to do their bit, and all of them looking after me (and around a dozen others).

Of all the things they could have wanted they settled on mugs! Now, those who know me well know the last thing I’d do was go down to the shop and buy a dozen off the shelf. I set about creating something unique. I delivered a dozen of the mugs below, along with a special card, and a load of tea, coffee, and biscuits.

I also delivered a card and chocolates to the Colerectal and Stoma Care Team, a much smaller unit whom, since the day of my diagnosis, were assigned to coordinate my care and operation. They telephoned and saw me several times, all the time telling me exactly what will, could, or might, happen. No namby-pamby sugar coating, either. Straight to the point and up front - good or bad.

The fact they were just a telephone call away 24/7 was a great comfort. They are still monitoring me and will do so for the next five years. Come next April they’ll again be shoving a camera up my backside, and the April after that… 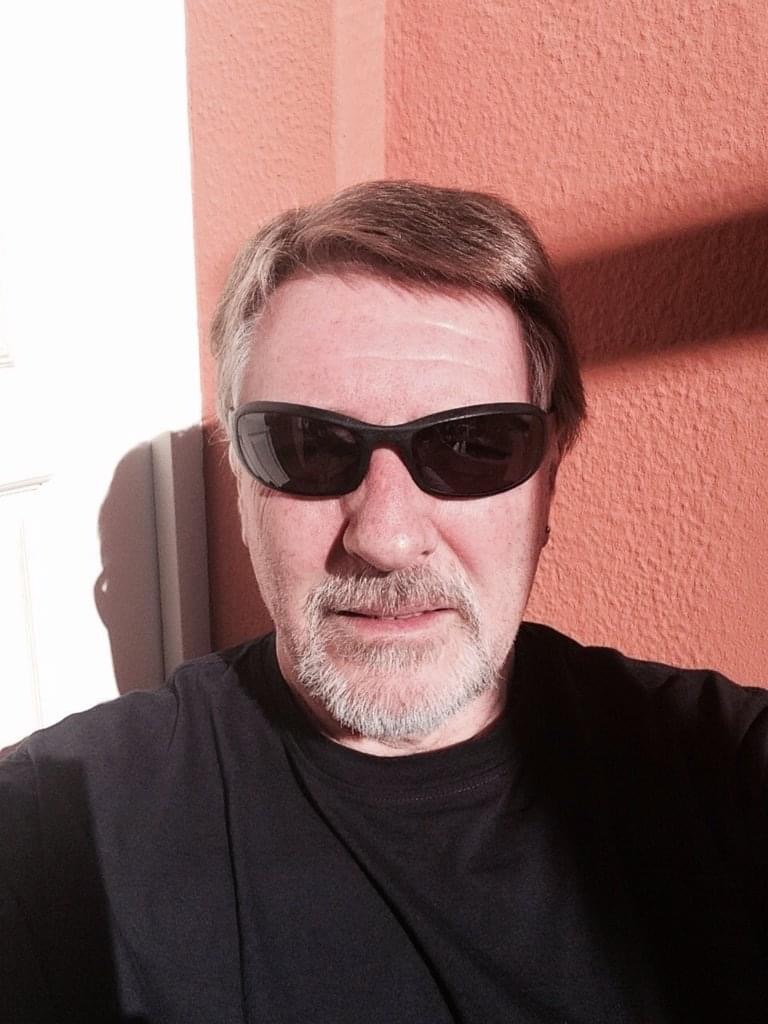 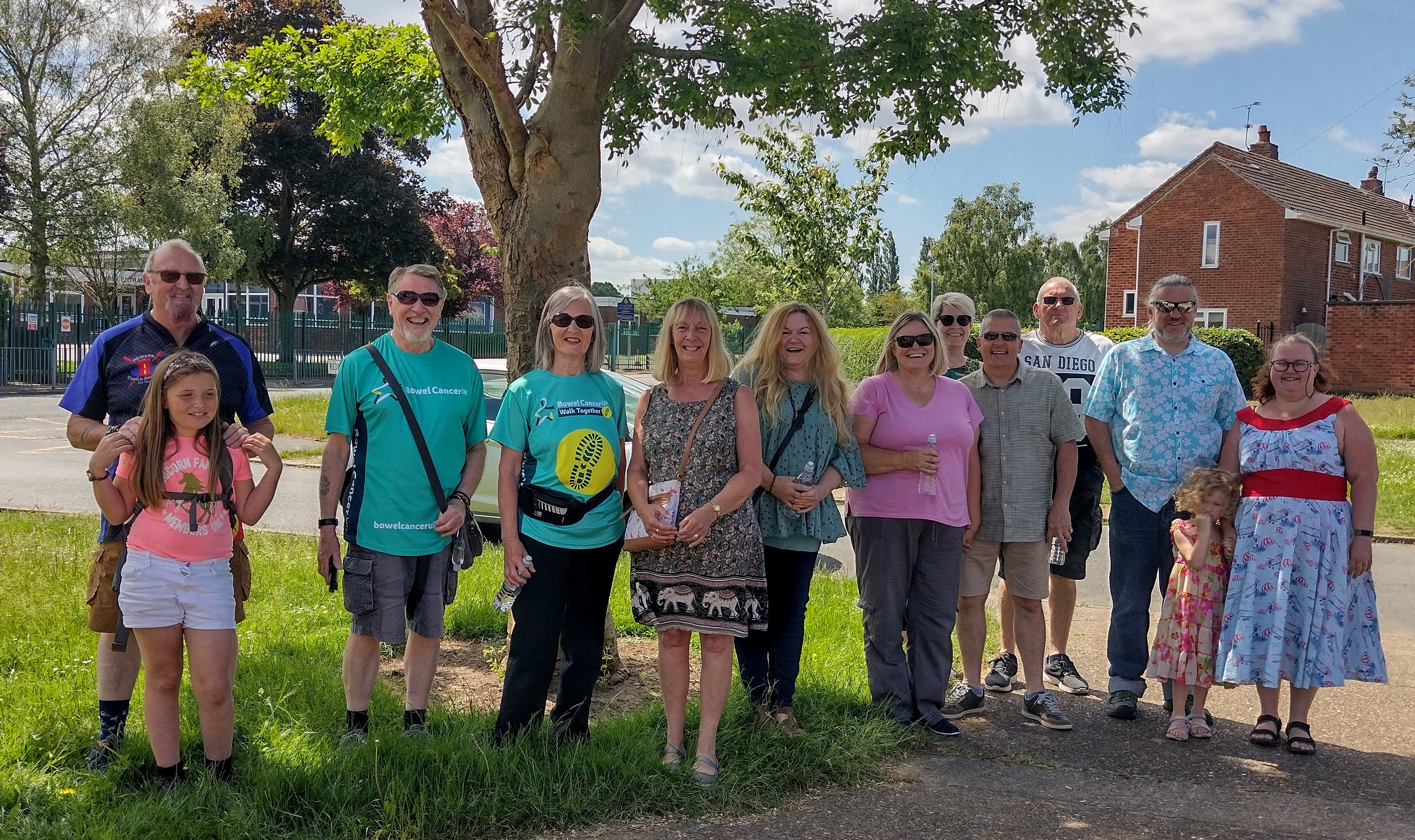 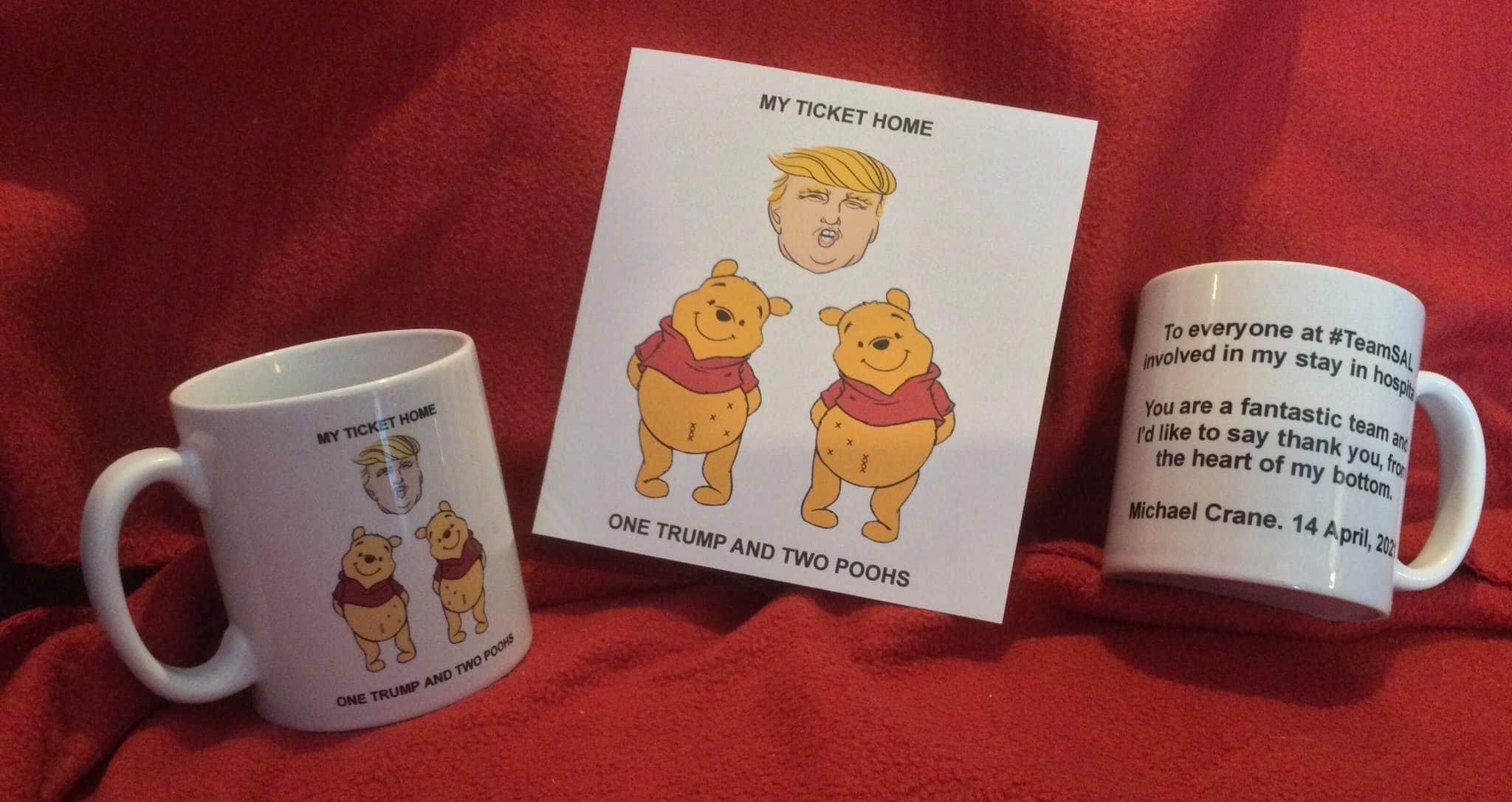