I was diagnosed with stage 3 bowel cancer in May 2021 – four days before my 60th birthday.

For anyone reading this who has started 'their journey' be that for themselves or someone close to them, I wouldn't dream of offering advice, as each case has its own path. For me I found talking to my wife Kay and my family, friends and work was both difficult and uplifting at the same time.

Difficult as I didn't want to worry or scare them with 'my problem' but uplifting when I found out just how many people care for me, the support they offered and my problem wasn't a problem it was the Big C.

In the spring of 2021, I started to get symptoms which I put down to my body telling me something wasn't right however I wasn't getting any of the typical symptoms associated with bowel cancer such as rectal bleeding or abdominal pain. I contacted NHS 111 and was given an urgent care appointment however after an ECG and blood pressure examination I was assured that I was okay.

A week later I returned to my GP to say the feeling had not gone away and was with me every minute of every day. I have in the past suffered from panic attacks, but I knew the 'something wasn't right' feeling was not a panic attack.

The GP requested a blood test to check my red cell count. The results indicated I had low iron and a reduction in the number and size of my red blood cells. These results identified I was anaemic and I was told this could explain why I was feeling run down however, I knew this couldn't be the reason as I felt that 'something wasn't right'.

Following the results from my blood test, my GP arranged a stool sample. A few days later I was very surprised when my GP called me to say that following the stool results, he wished to place me on a 'suspected cancer pathway'. Two weeks later I had a colonoscopy. Those two weeks seemed to take a very long time to pass.

The colonoscopy indicated an unexplained growth, which I was informed was likely to be cancerous. A biopsy of the growth was taken and it was also tattooed in preparation of being scanned.

I was then referred to my local NHS hospital consultant's multi-disciplinary review team. They arranged a CT and MRI scan and an iron transfusion. Only after the transfusion did I realise just how run down I had been.

Over the next couple of weeks, I had a face-to-face meeting with the consultant, who explained fully the situation and proposed options of what could be done. I found this to be very reassuring, as now I knew there was a plan to 'make things better'. In fact at the end of the meeting, I had a drawing to take away to show and explain to my family. I also had a plan A, B, C, and D. I was so impressed I signed the consent form there and then.

I received my appointment date for surgery and a few days ahead of my operation, I was placed on an enhanced recovery programme, in which I followed guidance of what to eat in the lead up to going in and also given supplements to take the day before, to aid recovery post-surgery.

On being admitted to Kettering General Hospital, I had open surgery to remove the right side of my colon and it was repatched into the remaining colon, this is known as a right hemicolectomy. I was wired up to allow me to have additional pain relief medication should it be required.

The following morning, I was able to sit in the bedside chair and managed a few steps around the bed. Three days later, and after I had passed 'body gas', I was allowed home. In short, if body gas comes out, it means the plumbing is working. On being discharged I was provided with a list of contacts to call should I have any questions or concerns. Fortunately, none was required.

At the follow up outpatient appointment I was told the growth was a stage 3 malignant cancerous tumour. The consultant informed me the cancer had been contained in the removed section of colon and he had also removed a number of lymph nodes from the area, which had come back as negative to containing anything cancerous.

There will be ongoing blood tests and monitoring for the foreseeable future, however I feel I have been fortunate and blessed at the same time, for knowing my body well enough to know it was telling me something wasn't right.

There will be ongoing blood tests and monitoring for the foreseeable future, however I feel I have been fortunate and blessed at the same time, for knowing my body well enough to know it was telling me something wasn't right.

I'm so thankful for the NHS and the amazing people that were involved in my journey from testing to treatment. For myself I view the NHS as one giant jigsaw puzzle, meaning you need all the pieces in all the right places, from the cleaners at the top of the list all the way to the consultants.

I feel blessed I have an amazing wife, family and friends and a very understanding supportive employer. I went back to work by means of a phased return in August and I have now resumed full working. 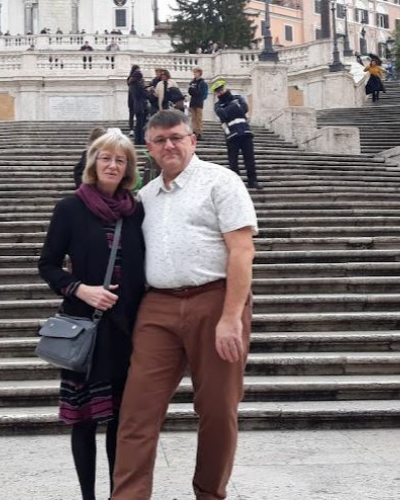