I was diagnosed with stage 2 bowel cancer in September 2020. I'm 57 with three grown up kids and have always led a very active and healthy life.

I first noticed symptoms during July such as increased frequency of visits to the loo and a sudden urgency to go, blood in what had become long thin stools, a constant ache and pressure in the coccyx area and over time increased difficulty in having a bowel movement. It got to a point where I'd be going to the toilet two or three times every hour.

I contacted my GP in mid-August, and having described my symptoms over the phone, she asked me to come in that afternoon. Following her examination I was referred to a consultant who arranged for a colonoscopy which took place on 23 September. My worst fears were confirmed when straight afterwards they delivered the news to my partner and I that it was a malignant 6cm tumour in the rectum.

The next three weeks were the longest of my life having MRI and CT scans and waiting to meet with the consultant to find out the results and treatment plan. I only confided in my sister and best friend as I didn't want to tell the kids until I knew exactly what I was dealing with.

I met with my consultant who told me the best news that the cancer hadn't spread and he would be able to operate in two weeks and hopefully remove it all. Even though the tumour was low he said my stoma would be temporary. I can't describe the relief.

The robotic keyhole surgery took place on 2 November and took almost seven hours. When I came round from the anesthetic, even though I was in pain and discomfort which was expertly managed by the wonderful team of doctors and nurses, what hit me immediately was that the awful cancer pain had gone, I felt elated and thankful.

I was in hospital just over a week during which time I learnt how to manage 'Stella' the stoma with the help of the colorectal nurses who were brilliant. I just focused on the fact that the bag was saving my life and a means to a positive end.

My histology report confirmed that I was cancer free with a 75% reduced risk of recurrence. I was offered the option of chemotherapy to increase that by 3 to 5% but after meeting with the oncologist I decided that having had such a positive outcome from the surgery, putting myself and my loved ones through a further four months of grueling treatment (during a pandemic) was disproportionate to the very small benefit that would be derived. This was an individual choice which I felt empowered to make and have no regrets.

I'm now four months down the road on this journey. Recovery from the surgery took about eight weeks, I was doing short dog walks every day from about two weeks. The support of my partner, family and friends has got me through. Telling the kids was the hardest thing especially as my daughter Emma lives in Australia so I had to break the news to her over FaceTime. But they've all been so strong and kept me strong too when I've felt at my lowest. There's been some emotional times that's for sure.

I joined the Bowel Cancer UK online community when I got diagnosed and have found it a huge source of reassurance and support. So many strong and positive people helping each other, all of us navigating our way through the biggest challenge we're ever likely to face.

I have been extremely lucky to have had an early diagnosis and a positive outcome and am so grateful to the NHS for the fantastic care I've had during these challenging times. Roll on my reversal which I'm hoping will be in April fingers crossed.

My son, Jack and his girlfriend Laura, will be running four miles every four hours over 48 hours – that's the equivalent of two marathons. It started on the 5 March 2021 and they have raised over £1,500. 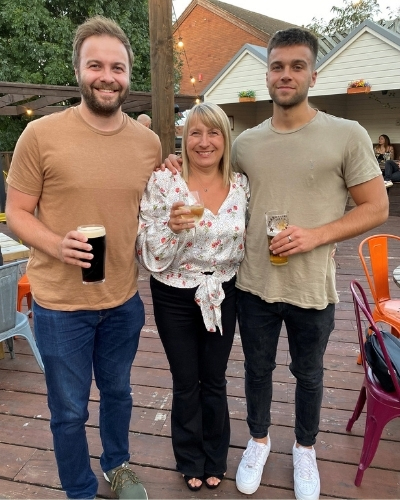