A few years prior to being diagnosed I had seen blood in my poo on a few occasions however I had put this down to pushing. The major symptoms started at the beginning of 2021. The main one being constipation however I thought this was because I had cut down my caffeine intake. I also had lower back pain which I put down to having lost weight and I noticed that my urine flow had slowed with 'dribbling' getting worse (I just put this down to getting old!).

I had mentioned constipation to the GP earlier in 2021 and was put on Fybogel. Since the start of the pandemic I had also lost five stone going from 20 stone to 15 stone by calorie counting and exercise. I was still in denial that there had been blood in my poo for a while so the thought of bowel cancer was the last thing on my mind.

On 29 June 2021 I went on a training course and when I went to the toilet I found I could not pass urine. I did eventually but this scared me and I went to see the GP the following day. She obviously thought it was prostate related and gave me a digital examination and found the prostate to be extended and had nodules on. Prostate cancer was mentioned along with an urgent referral for tests and to see an urologist.

The blood tests for the prostate came back normal and it was only on examination by the urologist that the cause of my constipation was found as a tumour in my lower rectum which was causing some blockage – this in turn was causing pressure on my prostate. The urologist then referred me for an urgent colonoscopy and I was seen in two weeks. It was here they confirmed bowel cancer. It was confirmed as T3b N1 M0 low rectal adenocarcinoma. T3b means that cancer has spread into the tubes that carry semen and N1 means cancer cells in the lymph nodes near the prostate.

There was concern about the liver but a recent MRI scan makes it unlikely that the cancer has spread beyond the pelvic area.

I was given treatment for the prostate with a medication called Tamsulosin which resolved the issues with the urine flow (common in men in late 50s).

Treatment so far for the rectal tumour has been five weeks of chemotherapy and radiotherapy. I would visit five days a week and have the weekend to recover. This phase of treatment aimed to reduce the size of the tumour in order to increase the possibility of saving more of my colon and the anus. This phase finished on 1 October 2021.

My main side effects have been fatigue. I also had some chemotherapy brain fog causing confusion and memory issues and cold hands (neuropathy). These are gradually easing but fatigue is still definitely an issue.

One effect of the radiotherapy I had during week four was a very painful bladder as it is not always possible for the radiotherapy waves to avoid the bladder. This was resolved with drinking plenty of water and the excellent care and attention from the staff at Clatterbridge.

My life has changed since my diagnosis. I am currently on long term sickness leave from work as I am unable to drive for longer than 30 minutes without a break as my lower back area where the tumour is will cause me severe pain. My immune system has also been compromised by the chemotherapy which has increased my awareness of the risks of infection especially during the period of COVID.

I am currently in limbo between the first phase of the treatment to shrink the tumour and waiting for the radio and chemotherapy to finish working before the decision on the extent of the surgery is made. This has been tough for my mental health and have recently been assessed for counselling. The variety of emptions have been difficult at times from anger, depression, denial and for me, worst of all was the guilt of having to put my loved ones through the experience.

So having cancer is not only physical, it also impacts all aspects of you and your life. I am so grateful that there are people out there pushing for research into cancer from all aspects and the professionals who look after people like me really do an amazing job.

So, I wait for the next stage which I expect to be surgery, a stoma and adjusting to a post cancer diagnosis life. 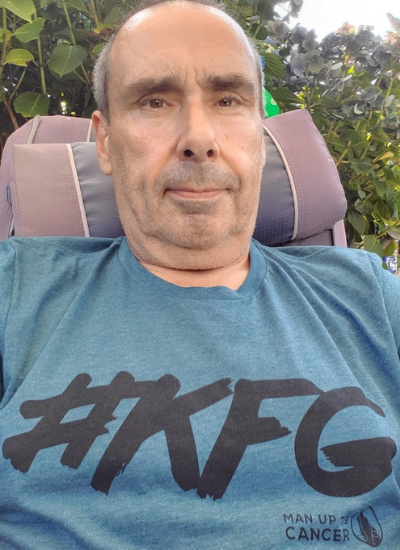 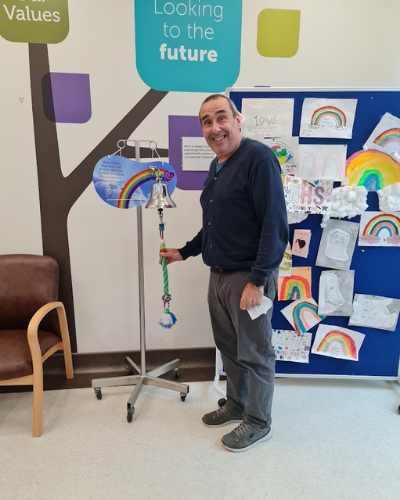