I suppose people's attitude toward the dreaded word CANCER is very important. I lost my wife to ovarian cancer and my partner, Jenny Elliott-Brown, lost her husband to bone cancer. However I have always know some cancers are treatable and with a positive prognosis.

My case started innocently enough. I got the bowel cancer screening test through the post and received the results. It came back negative. Life continues.

One day I noticed some blood in my stool but put that down to occasionally having a small fissure in my backside so thought that was it. When this became more constant and my visits to the toilet more frequent I thought this isn't right, best get it checked.

Now this is during COVID and you can't just turn up at your local GP. Mine used a telephone appointment system. I spoke to the GP who said come to the surgery that day. All COVID precautions taken I was examined by two doctors and told a quick referral system would be enacted. This started the journey.

First I spoke to the surgeon, then I had a colonoscopy. This went fine and a small cancerous tumour was found in my rectum. When I informed Jenny, she was really upset but we had mutual support for each other, me being positive to help her with her emotions and she supporting me.

So the next stage was CT and MRI scans. These would locate the tumour, highlight it and would assist the next stage. Jenny was with me during this meeting supporting me to understand what was going on.

Initial discussion with the surgeon had laid out the planned course of treatment, colonoscopy, MRI/CT scans then radiotherapy followed by surgery. The plan being to use radiotherapy to reduce the size of the tumour but also to eliminate any microscopic cancer cells that wouldn't be picked up by the MRI. During this time Jenny was struggling with the diagnosis but was being positive and we both helped each other out to come to terms with what was going on.

Went to see an oncologist at St James Hospital in Leeds prior to a five day course of radiotherapy. COVID regulations meant she couldn’t come to the meeting. He explained all the issues associated with radiotherapy and was very positive as was I. You see, this cancer was never really seen as a problem by me because I trusted the people involved and knew that, sadly, they had seen this all before and knew exactly what to do even though everyone is different.

My attitude was, along with Jenny's, who was on this journey with me, it is what it is, deal with whatever comes along and be positive that the outcome will be the best it can be. It's understandable that people will think differently but I understood what was being done and why, so was happy to continue.

The day before my radiotherapy started I had another appointment with the surgeon, again without
Jenny due to COVID regulations. He went through what the CT/MRI had found. Yes, treatable BUT the location of the tumour was a concern. He drew diagrams of what he planned to do and that a small section of my rectum would be removed and the colon reconnected but it depended on how much tissue was available. Best case scenario.

If not, the same but a temporary stoma if reconnecting was more difficult and time for healing. Final option was a permanent stoma. He pointed out that he wouldn’t actually know which of the options was going to happen until he was inside nor whether it could be done by keyhole or open surgery but would start with keyhole.

The date of my operation was also confirmed. Also at the meeting was a stoma nurse who took me to another room to explain all about stomas and what would happen. This was an option so precautionary and training planned prior to the operation just in case. Again all positive. So for five days me and Jenny travelled to Leeds for a 15 minute radiotherapy sessions. Jenny again being very supportive whilst still being concerned. Again COVID regulations meant she could stay in the common area but wasn’t allowed into the treatment area. Superb staff and very well run, the only sad part was seeing the numbers of people who were undergoing treatment. Leeds is a centre that covers a large population but it was still a surprise.

Radiotherapy complete, waited two weeks and then I had surgery. Minimal side effects for me with the radiotherapy. I had a pre-op meeting with a nurse, again on my own due to COVID. All vitals checked, COVID test set up, pre op drinks supplied. Me and Jenny got up early, Jenny still worried but we are supporting each other through this and she drives me to the hospital by 7am for the operation, after following all the requirements of eating and drinking. Everything still positive. So our journey continues.

I met one of the surgical team and anesthetist, everything checked and confirmed, surgeon pops in on way to preparation, all positive. Into theatre, Covid has mean different procedures and protocols, where the anesthetist put me under.

I wake up in the ward with lots of connections and machines feeling slightly groggy but comfortable. The nursing staff explain what’s happened, they have contacted Jenny and told her that everything has gone well. I have pain relief procedures but the operation had gone well.

The first option had been done so no stoma and that a biopsy of the tumour had been sent to the lab for analysis. So now the journey is to recovery. I was in minimal pain, but there were lots of care and vital bloods taken along with medication supplied.

Next day I'm feeling much better, again minimal pain but just soreness in parts. The doctors explained they tried keyhole but they had to open me up to do the resection so now my stomach is like a mathematical division sign turned 90 degrees. The surgeon explains exactly what happened and that it’s gone well, should be released home within a week. I contacted Jenny, via messenger, who is far happier than she has been so far through this journey. It was lovely to see the smile on her face. Because of COVID, visiting isn't allowed but this is as good a substitute.

I started passing wind, which is a good sign and after a few days eating solids whilst having soups, ice cream and yoghurt then onto a more normal diet.

Slowly but surely things improved so I was discharged and Jenny, again with a lovely smile on her face, came and took me home. We received a phone call and the results of the lab report. No cancer in the margins nor in the lymph nodes. Good news. So the journey continues.

I'm recovering slowly, feel tired, my bowel movements are erratic, but the pain is minimal and my staples are removed. Jenny is being so helpful and supportive and we carry on the journey together. Now regular checks six monthly and annual CRT/colonoscopy for five years. Considering COVID, this was the best outcome for me. I was confident all the way through that the people involved would do the very best they could and did slowly but surely getting better.

Moral, look at stools, if in doubt see your GP. 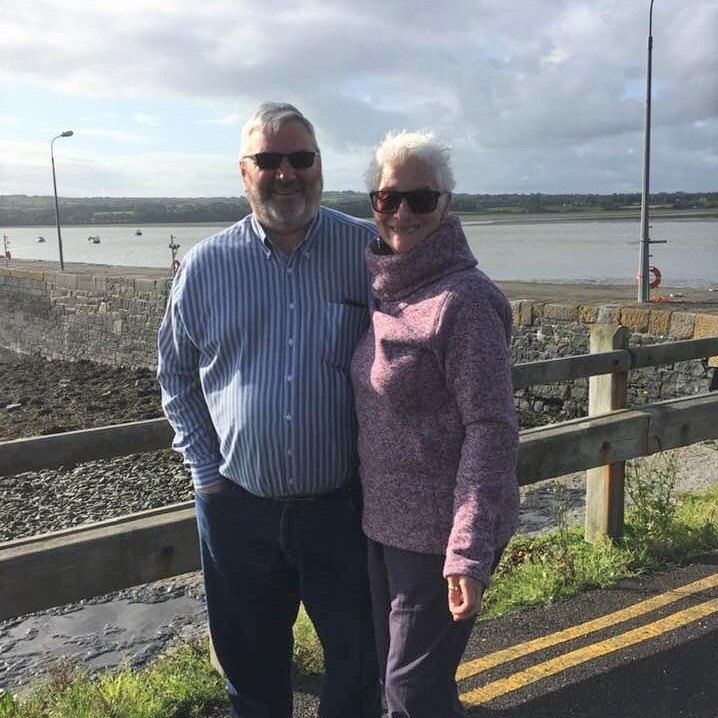