Life was good for me, I was half way through my undergraduate sociology degree at Coventry University. I was doing student radio and had my own radio show. I was learning about broadcasting, journalism and media production.

New Year's Eve 2018. I was at home alone with a glass of wine in my hand, and watching on TV 'Big Ben' chime midnight, out with the old year and bring in the New Year. I had a sense that something bad was going to happen in my family, and I couldn't put my finger on it. That night I had the most horrendous and frightening nightmares.

The first week of January 2019, I  began to notice that there was blood coming out of my bottom. I thought piles, and hopefully they will go away. By the third week of January, it began to get worse. I went and saw my GP. He diagnosed me with piles, I was given some cream and he told me not to worry. I was worried because my family have a history of bowel cancer, and wearing colostomy bags. My granddad Wilf had bowel cancer, and wore a colostomy bag. He died in 1978, when I was only eight years of age, and my sister was five. I wasn't convinced that it was piles, because I started to develop a crippling pain in my tummy, and the loose bowels and bleeding from the bottom got worse.

I went back to my GP, and he said he thought it was irritable bowel syndrome (IBS). So once again I came away feeling I know there's something wrong. This carried on for a few weeks, bleeding from the back passage, feeling bloated, severe diarrhoea, and sometimes my poo looked almost black. I was also in a lot of pain in my tummy area and felt constantly tired. By early March I went back to my doctor's surgery, and saw a different GP, who said he thought it might be Crohn's disease. The GP examined me and said he wasn't happy with the mass he could feel in my tummy area, and wanted me to have tests at my nearby hospital. In mid-March I went to Solihull hospital and saw a bowel consultant and surgeon, who gave me a very intrusive physical examination, and took a biopsy. He said after feeling my tummy that there was a definite mass and he couldn't say whether it was benign or cancerous, but I would need a colonoscopy. I was very upset and cried, and the nurse had to comfort me. By this stage I was very frightened, and imagining the very worse.

Early April I had a colonoscopy, and on the screen, I saw this big ugly tumour on the screen, that had hairs and teeth, and looked very angry. It looked like an alien and invaded my body. The doctor wanted to speak to me and my dad. I had to wait until he could collect me. In the consulting room the kind doctor held my hand, and said to us 'I'm afraid it's not good news, it's stage 3 bowel cancer, it will need to come out, you will have radiotherapy, surgery, a stoma hole inserted, and will have to wear a colostomy bag for the rest of your life, and you will need chemotherapy. I just sat there dumbfounded. My dad in shock said 'There's always one, and it's usually Karen'. I just wanted the ground to swallow me up, and I was very fearful of what lay ahead for me.

Going into the summer of 2019, two things happened that would have a profound effect on me, shaped my future, and made me the person I am today. In May 2019 I met my oncologist Dr Good at the Queen Elizabeth Hospital, Birmingham. I remember one of the first things he said to me was 'I can't cure you, but we can control the cancer and the benign tumours. Your body keeps producing tumours whether cancerous or benign, we can control them, but I don't know if I can give you that complete miracle cure.' I sat there thinking blimey, that doesn't sound great, but at least he's honest.

Fridays was always double dose radiotherapy day. I would be practically crawling down the long hospital corridor, and sometimes I had to get a taxi home, because the bus journey would be too much for me. I had a really good radiotherapy buddy Martine, and together we kept each other going. We would always text each other and basically always be there for one another. When it was my birthday Martine and her friend that would bring her to hospital, bought me a big box of Milktray chocolates. Every time I think of Milktray chocolates, I think of my friend Martine, and the jokes were used to make about the Milktray man, risking danger, life and limb to deliver me some chocolates.

The radiotherapy shrunk the tumour, so that they could then go on to the next stage which would be surgery to remove the tumour, and add a stoma hole for my colostomy bags.

Sadly Martine passed away to her cancer. I was very upset, and I miss my radiotherapy buddy very much. 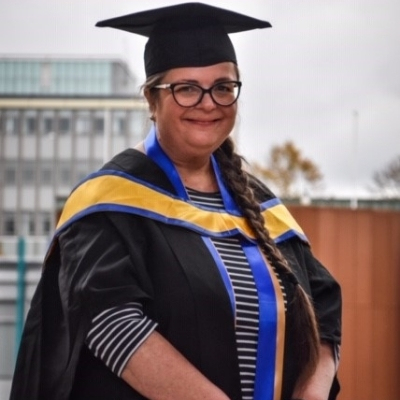 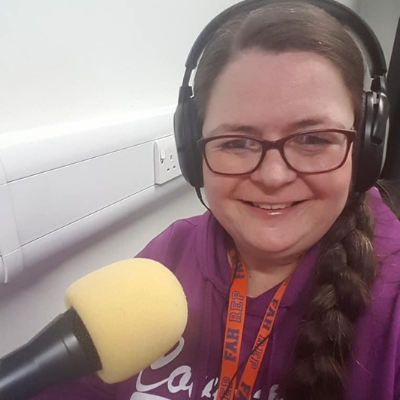 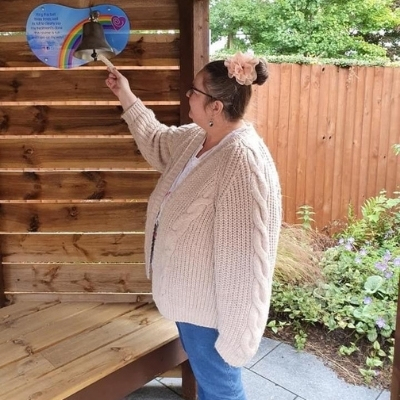