My symptoms started in May 2017 when I discovered blood in my poo and was losing weight. When I first experienced these symptoms I did not feel worried as I had not been ill before and generally felt fit and well. I thought it would be haemorrhoids which could be easily treated and clear up quickly. After receiving a letter from the screening centre in Scotland my anxiety was heightened as I knew there was blood in my poo and now felt more concerned that it could be serious.

I visited my GP that month and he referred me for a colonoscopy however it was not given an urgent referral. Later that month I completed a bowel cancer screening test which came back positive. I was then given a fast track appointment in June 2017 for a consultation and colonoscopy in my local hospital, Glasgow Queen Elizabeth University Hospital.

While I was anxious I went along with the considerable preparation required for the colonoscopy as days before a very heavy duty laxative was required to purge my system and completely empty my bowels. This was not pleasant. Several trips to the toilet were required. Watching what you eat was required. Then on the day of the colonoscopy you are not allowed anything to eat or drink, except water, which is not great. So I arrived at the hospital and the doctor said the camera was the size of a biro pen. This was reassuring as it was not too big. I asked if I was to be anaesthetised to knock me out and feel no pain or discomfort. I was surprised to discover that you must be fully awake because you needed to move about the bed because they have to wiggle the camera into some difficult areas. The nurse advised that it was not painful but I was still nervous. The procedure went fine and the doctor was able to show me a picture on the monitor next to the bed.

After the procedure I was given a welcome cup of tea and some bread and jam which was all the nurse had available as it was now late afternoon. I asked if I could get up and leave but the nurse advised that the doctor wanted to see me to discuss the results. I was now very concerned and worried. With 12 people being tested two people had been told to stay behind and I was one of them!

I then met two doctors with my wife present who told me I had bowel cancer. I was stunned and shocked. I could not believe it. Why had this happened? Why me? They were very patient and kind and answered my questions fully but the truth is they don't know why some people get bowel cancer and others don't. I was upset and disbelieving. It was now late afternoon and I felt drained and very worried about what happened next. We then left having been told I would need an operation to remove the tumour from my bowel very soon.

My wife was great and when I shed a tear she was able to comfort me and support me. I was glad she was with me when I had this devastating news. I then went home and spent the next few days telephoning my family in the USA with the news which was very emotional for me to tell my two sons. I also told all my friends and family in Scotland and England and they were all shocked but all very helpful and supportive which was great.

Again, I was sent another fast track appointment for surgery on 8 August 2017 as the tumour required an urgent operation to remove it and prevent the cancer spreading.

My surgeon was confident he could get the tumour out successfully and then re-join my bowel together and I would be fine. I was glad he felt confident as this made me confident. The operation went well and I then spent one week in intensive care to fully recover from this major operation. My doctor advised me that it was a stage 3 tumour which was breaking into other parts. Two out of 23 nodes tested were cancerous. So this meant that chemotherapy was required to clear all the cancer in the area. I was disappointed as I hoped not to need chemotherapy but the surgeon advised that this was essential to completely clear the cancer so after discussing with my wife we agreed to this treatment. Over the next few months I recovered well at home with great support from my wife.

After I had recovered, I began chemotherapy for six months starting in October 2017 and finishing in March 2018. I've experienced side effects from the chemotherapy including peripheral neuropathy in my fingers and toes and permanent ear damage to the point I now have to use a hearing aid. I've also had to take laxative medication every day since my diagnosis.

Apart from this I am fit and well. I was given the all clear by my surgeon in 2021 as there was no sign of the cancer coming back. I have had check-ups once per year since my operation. If it is coming back it is usually in the first three years after treatment so I am very pleased and relieved. Great news!

Since 2018 I have been a volunteer for Bowel Cancer UK in Scotland. I have given 12 talks in Glasgow to local groups promoting bowel cancer health and increasing the use of the screening test. I have been volunteering to give something back as I had great treatment from the NHS and my cancer was caught early. The screening test worked for me so I want to encourage others to use this test. Bowel cancer is treatable if caught early. I have also enjoyed meeting other volunteers (pre-covid) to share our stories. If you have been newly diagnosed try to keep positive. The sooner you are treated the better. You can make a full recovery like me. 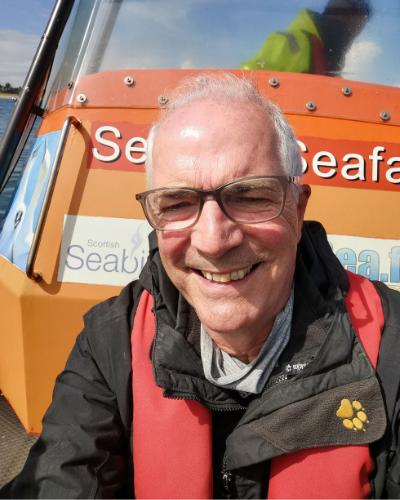