I had felt extremely unwell for a long time and although I was two years sober I was just still feeling awful and had extreme exhaustion which was not taken seriously by my doctors. I knew there was something wrong but I thought it was maybe perimenopause. Finally what got me to the doctor on that final day was what I now know to be tenesmus… a feeling of pressure to go to the loo.

Looking back my experience with the GP was diabolical. I had been going on and off for two years knowing there was something wrong and went several times towards the end of 2019. One doctor literally laughed at me and made me feel like a hysterical woman. Other doctors did basic blood tests but when nothing really showed up I was just dismissed. I 100% don't think enough was done to investigate. Looking back I should have pushed more but I was just made to feel like the exhaustion was stress and normal for a lady of my age.

So after a year of feeling very unwell I went back to my doctor's surgery. I was urgently referred by a nurse from my doctor's surgery. Looking back I can say that she saved my life that day as it was five days before the first big lockdown and I know for a fact I would not have gone to the doctors again with COVID and lockdowns etc. I was diagnosed three weeks later following a biopsy.

I started treatment in April 2020. I started with radiotherapy to shrink the primary tumour. I then had an open ELAPE surgery which resulted in a 'bag for life' as I like to call it! This was a huge operation and I had infections after which I've just had to have another surgery to fix.

I then had a lung resection in November 2020 to get rid of a smaller tumour in my right lung.

Following this I had chemotherapy which finished in April 2021… a year to the day of my diagnosis!

The side effects of it all have been a lot, mainly massive mobility problems, chronic fatigue and pain which are ongoing. I also have a really large parastomal hernia which can't be dealt with until next year.

My life has completely changed since diagnosis. I used to run a really busy cleaning business and was on the go all day long. I can't work or rebuild my business as I am just still not well enough and I am still really having to learn to rest. I do miss being spontaneous as have to plan any days out etc. around naps! However, I have learnt that if I can get through this I can get through anything and I have really tried to maintain a positive outlook and find humour in the dark times.

I was diagnosed right at the very beginning of the pandemic. So I was told I had cancer over the phone in my living room alone and then had to wait 10 days for another call to give me all the detail which was so difficult. I also had to attend pretty much everything alone… was definitely not how it looks on the telly with a big team of support etc. I would have been completely lost without my nurse Gill who was a lifesaver with her advice and support although I have never met her in person.

I am also very lucky to have a great support system from my amazing family and friends. In particular my aunt Sallyann who made it clear from day one that 'I was not going to die from this' and this was very luckily the case. I also have two incredible children Nico, 21 and Khalil 17. They have been amazing through the whole thing and have kept me grounded and laughing even when totally inappropriate! If I could give anyone any advice who is going through a similar situation it would be to just take everything one day, hour, minute at a time if necessary. That and to KEEP GOING back if you know you are unwell and you aren't being listened to… it could save your life. 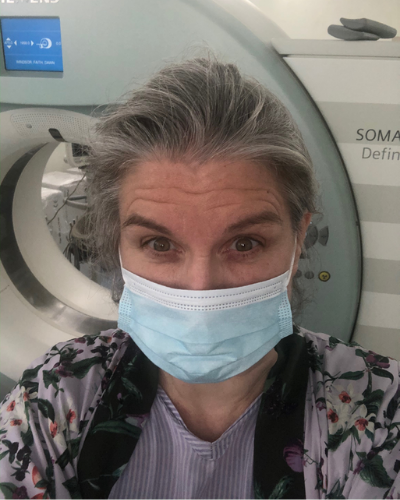 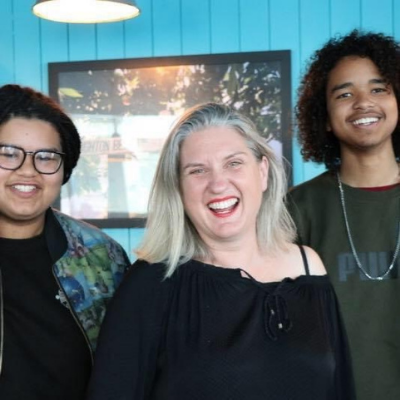