At first I thought my symptoms were a bug. I work for an American insurance company so I was on a business trip to Chicago in April 2017, when I started to feel like I really needed the loo all the time, but when I’d go nothing much would come out. I put it down to illness, probably from the travelling and being tired, but by June it was still there.

I didn’t have any other typical bowel cancer symptoms, but I was starting to get concerned. My GP suggested I have a colonoscopy. But due to my relatively young age and the fact there was no blood in my stools, it would be at least a six week wait.

I was keen to get this sorted by this point and fortunately for me, my work provides private health care. I’m not a fan of using private health care over the NHS, but I knew I had to get checked ASAP. I arranged an appointment and saw a consultant within four days.

The consultant was concerned with my symptoms so I underwent a CT scan, MRI scan and sigmoidoscopy. I’m a realist and I knew something was wrong. So, when the bowel cancer diagnosis came through, I wasn’t surprised. I just wanted to work on getting this fixed.

I was referred back to the NHS and in late September I underwent surgery, having a lower anterior resection and ileostomy.

The day I left the hospital half of my central line incision dehisced. Just unzipped itself, well just like a zip would, which would then take the next 2and a half months to fully heal. Early on I had my stoma bag pop off during the night and awoke to faecal matter actually inside my wound…yuck!

My initial oncologist appointment was booked at a hospital far from me and it would have been incredibly difficult to get there. So, I pushed to have the appointment moved to a hospital closer to me, which was attached to The Northern Ireland Cancer Centre.

I was walked through my possible treatment plan and it was decided that chemotherapy would be my best option. Luckily, in June that year a paper has been published which showed for my chemo drug, four rounds worked just as well as eight. So, I was booked in to start chemo in December.

But then I had complications with my stoma.

In late October, fluid started to come through the stoma. At first, I was emptying it out every 30 minutes and then I ended up back on a toilet, with fluid just pouring out. A doctor came to the house to check me and then we got a call to say we had to get me to A&E within the next hour, or my kidneys would fail.

This was a reminder that when you have bowel cancer, you always have to be prepared for every eventuality.

My day job was as a product manager and I used this logical skill set to deal with my cancer. I’d gone from managing projects to managing a product – me and my bowel cancer. So I made sure that I had planned for every eventuality. I had a hospital bag packed by the door, that my partner could grab if we had to dash to hospital. I ensured she was a joint account holder for my bank, so if anything happened to me, she had immediate access to my money as well as hers. I also made sure I always carried two spare sets of clothes, wipes and stoma changing supplies, so if I had a leakage when I was out and about, it could be easily sorted.

After I was released from hospital, I started my first round of chemo in December. It was painful as it went in and afterwards, I had neuropathy in my hands and face. I also had neuropathy in my throat, which I realised when I tried to have a cold drink and it felt like razorblades cutting down. After that I avoided cold drinks for a while and it was hot tea all the way.

When you have bowel cancer, you always have to be prepared for every eventuality.

My second round of chemo was more painful, I relented and allowed a PICC line to be put in. I’d really not been keen on getting one, but it made the whole procedure so much less painful. I’d advise anyone about to get chemo to have one put in.

Almost immediately after my second round of chemo my stoma started to seep fluid again. And I was back in hospital, this time for nine days.

Having all these stoma issues didn’t really endear me to it, but I just looked it analytically. It was something that was my inside and now was outside and more importantly, in the long term it would help me.

We found out that the reason my stoma had been having these issues, was because I take medication for type 2 diabetes and this had been reacting with the stoma.

To add insult to injury, while I was having the chemotherapy my son broke his ankle playing rugby and needed surgery to put metal plates and pins in his leg. Then on the day of his surgery, after returning home, my wife fell and broke her nose – could things really get any worse! But this goes to show that even under my circumstances life still goes on around you, for good and for bad!

After that, everything went as smoothly as it could. Then I finished my fourth round of chemo and developed a pulmonary embolism. Just like that, I was back in hospital.

There was some good news though. The CT scan that discovered the pulmonary embolism, also showed that I was officially clear of cancer. Which meant I got to find out the all clear much earlier than I would otherwise.

But shortly after that positive news, I woke up to find that my leg was black and swollen. I was diagnosed with Deep Vein Thrombosis, on top of the pulmonary embolism. To combat both of these, I had to take around 360 injections over six months. It was not ideal.

Having cancer can turn so many things upside down. Before the diagnosis, my partner and I were planning our wedding. We were due to get married in New England in America. Her family were driving down from Canada and we’d booked an amazing lighthouse for the venue. Then I got cancer and we had to cancel the wedding. Fortunately, by cancelling the wedding, we got back the money we’d been saving, so we had emergency funds if we needed it. A luxury a lot of people don’t have.

I still have some side effects from the chemotherapy. About two months after I finished my chemo, I got neuropathy in my feet and I’m now seeing an expert to look into this.

Another side effect that isn’t often talked about is erectile dysfunction. I found out that a lot of men who have a lower anterior resection, have erectile dysfunction afterwards. But I only found out about this after I had the operation. It’s something that really needs to be better explained and flagged, especially before you have the operation.

I’m now several months on from the all clear and things have changed a lot. I’ve rescheduled my wedding and I’m being phased back into work. I’m also eating better, exercising more and don’t take fools as lightly – after all, I now know life is too short to worry about them.

After receiving such amazing care from all of my doctors, nurses and specialists I decided it was time to give back and with that in mind I signed up as a Bowel Cancer UK volunteer to provide talks and awareness sessions in Northern Ireland. I completed my training in April 2019 and had my first talk 2 weeks later at my workplace where over 50 people turned up to listen and question me – a really amazing experience and I am looking forward to many more!I really hate it when people call me ‘cancer survivor’. I didn’t survive cancer, I suffered from it. Saying I survived it, gives cancer back the power and takes away all the things I did to it. I won’t ever let cancer be the thing that defines me.

My final thoughts would be that cancer isn’t something you go through alone, it affects all of your close friends and family. Take their support, even be their support at times. For me, my rock through all of this was my wife Carole, I doubt I’d have come though this without her. Oh, and be prepared for anything, for me, if it could go wrong it did – but I’m still here, stronger than ever! 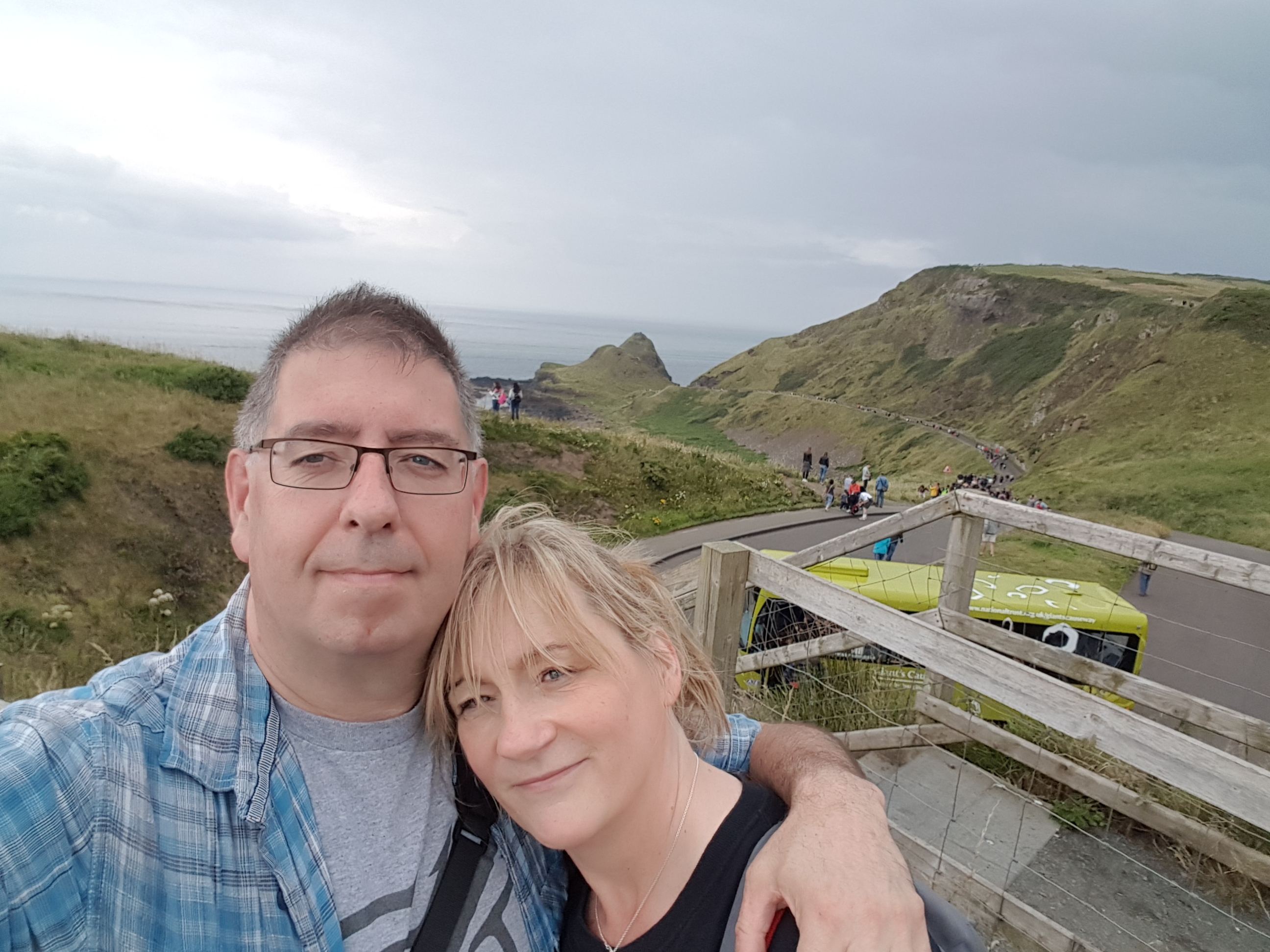 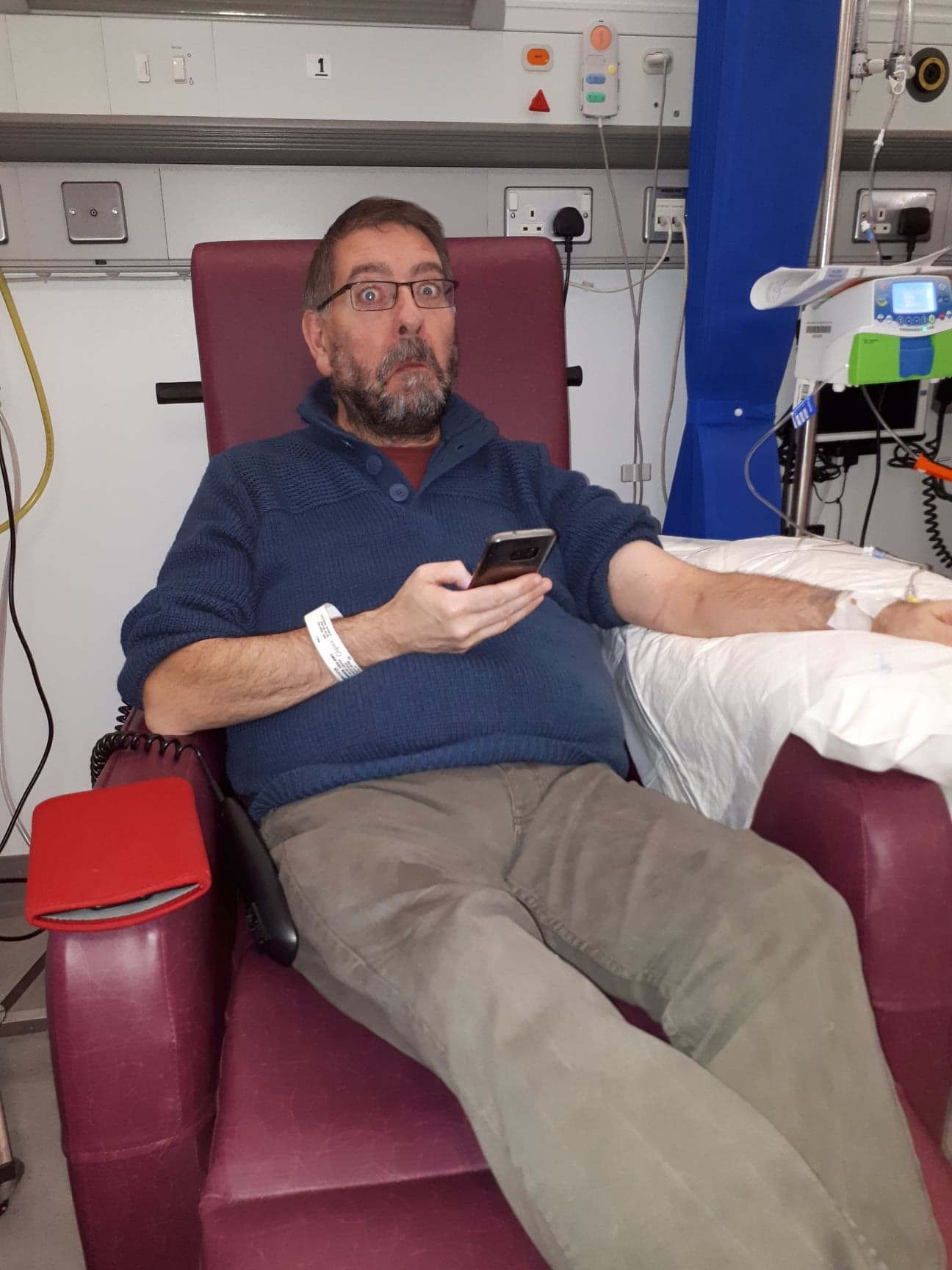 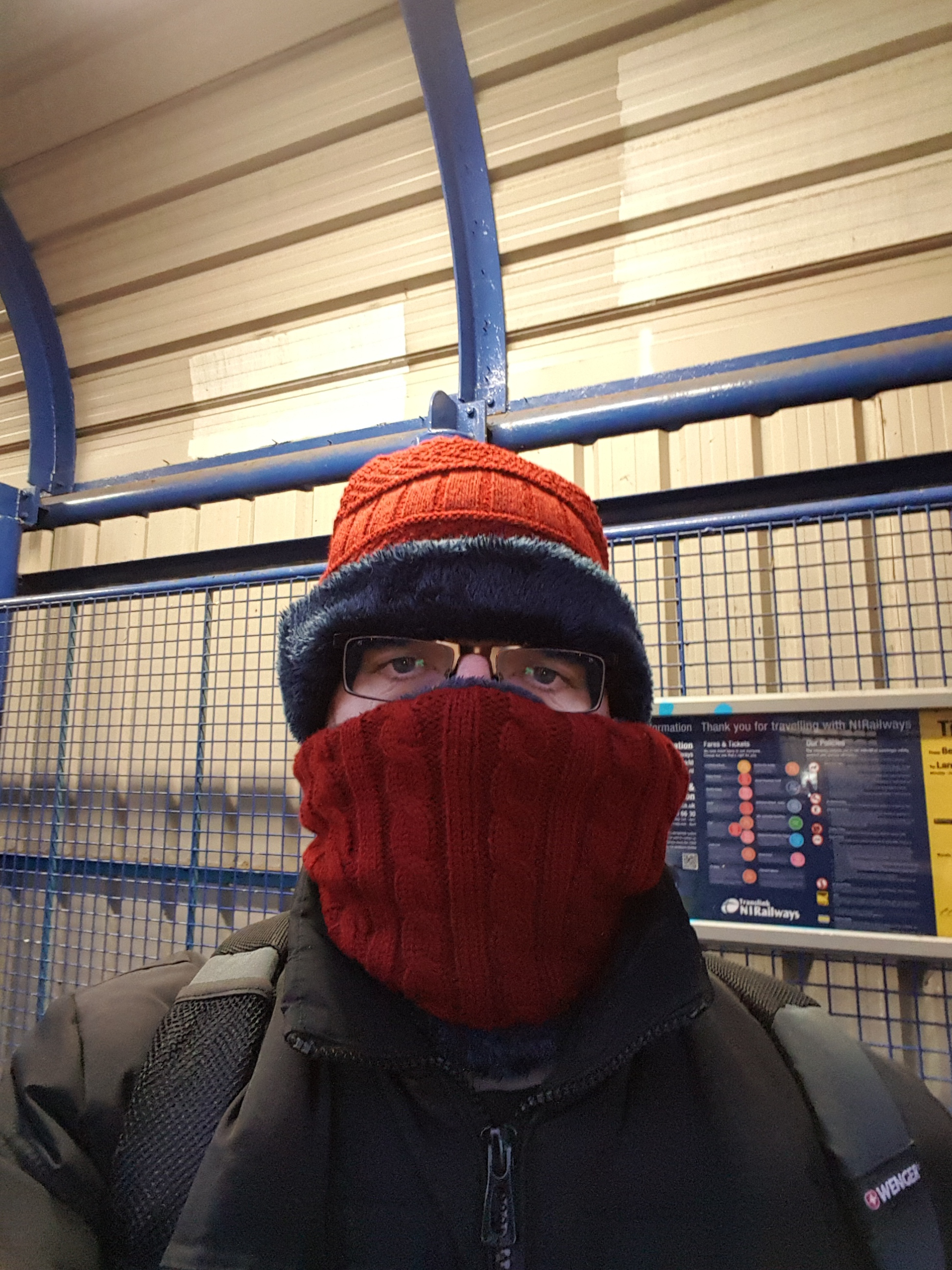 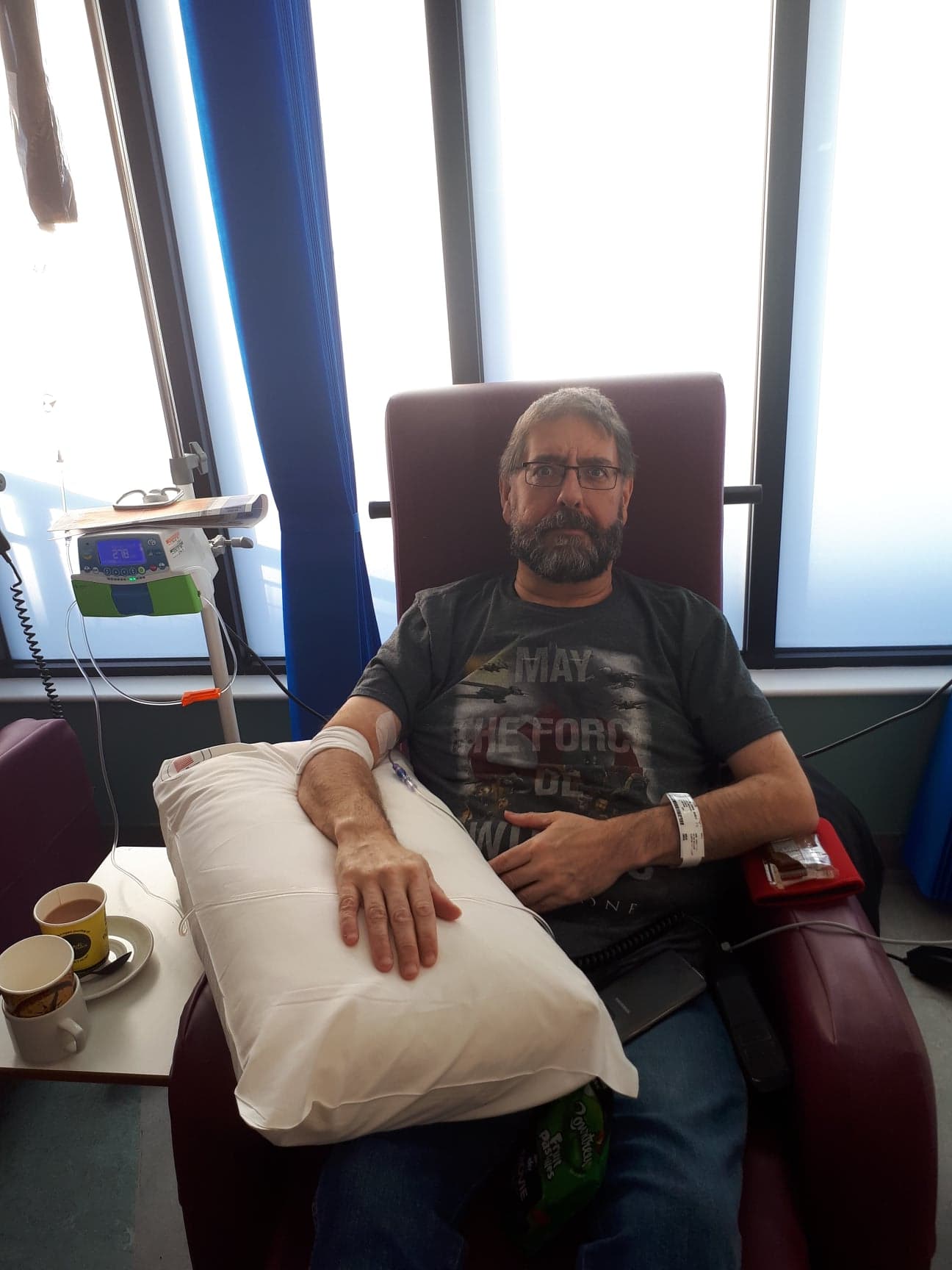