Our daughter Alison lived in south London and was 43 when she died from bowel cancer in July 2019.

We hope her sad story will encourage younger people to persist in getting proper investigations into nagging discomforts and to convince GPs that bowel cancer can and does affect people much younger than accepted wisdom used to indicate.

In February 2019 Alison noticed a dull pain around her left kidney. She self-medicated with garlic and turmeric to counteract a possible kidney infection. However it didn't go away so she went to her GP and they treated her for a kidney infection. Despite no benefit to the treatment or confirmation from blood tests, they continued to prescribe her with ever-stronger antibiotics. At one point the GP actually said it could not be anything sinister like bowel cancer because she was too young.

In agony, she went to A&E at King's Hospital twice for tests, but still the cancer was not detected. The second time she went, they said she most likely had constipation. She was then discharged.

At the beginning of March she went to the GP and she was prescribed stronger laxatives, but she went to A&E again as she was in so much pain; this time she was admitted as an in-patient. She saw an abdominal surgeon who examined her and referred her for a CT scan as he thought it could be diverticulitis. The CT scan didn't show a tumour, but enlarged lymph nodes in her stomach and ovaries, and cysts on both ovaries. She was then told she must have a transvaginal scan first thing the next morning. Two days later and after complaining to the consultant, she finally had her urgent scan. The scan didn't show anything that the CT scan had, and she was told that the transvaginal scan was more accurate. They transferred her to haematology, discharged her from hospital and asked her to visit her GP to be referred for a colonoscopy.

She felt very unsafe leaving the hospital. She didn't trust the medical team as a year earlier they failed to pick up on cysts on her sister's ovaries, which were only picked up later on a CT scan. She was still in so much pain.

She ended up seeing a private gastroenterologist who reviewed her bloods and scan results. He advised that having a red blood count was mandatory and that she should ask her GP for a colonoscopy referral. She urged her GP for an urgent referral, which he did do, but after examining her still said that she had constipation – even though she was adamant that this wasn't the issue.

It wasn't until the end of March 2019, after making a complaint to the hospital, that an emergency colonoscopy was carried out, and there the tumour was found. She was told that she would have surgery within two weeks, but this was then delayed because the surgeon was on a three week holiday. There was an alternative surgeon available, but nevertheless she may have to wait up to four weeks for the surgery. She was then shocked to be told that she was  being referred to the breast cancer clinic as they found enlarged lymph nodes under her left armpit.

After a very unsatisfactory session with a breast cancer consultant/clinic. It was confirmed there no breast cancer or underarm lymph problem.

She had her operation at the end of April, and after the usual convalescence, she was accepted onto a new immunotherapy trial. However, by then she was too weak to receive any chemotherapy or other treatment.

She quickly deteriorated and died in a hospice on 4 July.

Alison was a single parent to two young children. From early April we moved into her house to look after her and the children. It was a very difficult and devastating time, during which nothing seemed to go right. Instead of the help and support we expected from various bodies, we mostly faced hurdles and bureaucracy.

We're really hoping she was just unlucky, that her story is unusual and that most people, even young people, receive better attention, diagnosis and treatment. But if you are a young person with a suspicion that something is seriously amiss, don't leave it; persist and make sure you get thorough examinations, tests and a proper diagnosis. And if you are a GP, please don't let age persuade you nothing serious can be happening. 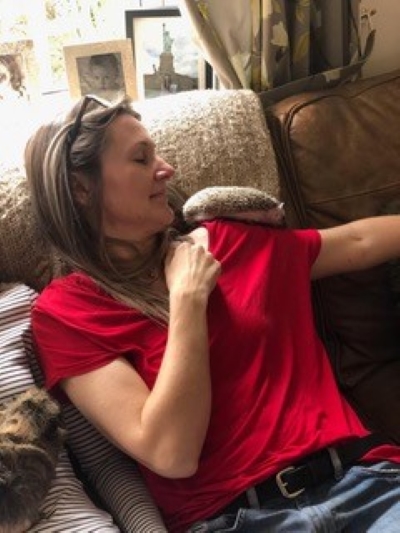