My husband was diagnosed with stage 4 bowel cancer in October 2019.

In July 2019 my husband Lenny who was 54 at the time, started to complain of a back ache. He also mentioned that he had the feeling that he wasn't emptying his bowels properly. We went to the GP who gave him Laxedo. After a month or so we went back to the GP, who examined him internally. I asked could he be sent for a colonoscopy to put his mind at rest. Unfortunately the referral letter took ages.

Lenny's uncle who had bowel cancer, volunteered in PALS in St Thomas' Hospital, suggested that before he went into work he go into the A&E. This was absolutely the best advice that we could have been given. We were seen by a lovely doctor who took bloods, asked lots of questions and although didn't think it was anything serious, booked Lenny in for a colonoscopy the next day, which was 9 October 2019.

I went with him into the hospital whilst his mum and dad went into the family business, to return and collect us after he had had the procedure. I sat in the waiting area, fully expecting him to come out and say 'all done, nothing to report'. I was called over the tannoy to go to the collection area. When I got to the doors I could see Lenny through the glass panel and I just knew. His face was so pale. We were taken to a side room where we were told that there was a mass and they thought it looked like cancer. I remember a burning feeling, and my heart pounding in my ears. And his face. We were told that an appointment for a CT scan had been made for the following day at the Cancer Unit in Guy's Hospital.

We walked out of that hospital and I honestly can't remember how we got down the stairs and into the street. I can remember standing holding each other crying in the middle of the pavement. Lenny rang his parents to collect us and told them it was not good news. The journey home was horrendous. Over an hour in the car with just quiet sobs. Not one word was spoken.

Lenny had his first scan and then we waited for five days to go and meet the consultant that would head Lenny's team. We were taken into a room and met Mr S, he started off saying that the cancer had spread from the bowel to the liver. I was a mess. I couldn't think straight, all I could do was cry uncontrollably. Lenny never said a word. I think I worried Mr S because he went out and came back in with Dr D. It just got worse because we were then told that the cancer was on his liver and on his stomach wall. Our world, right at that moment, changed. We have three children, and three grandchildren who we absolutely adore, and had to tell them the awful news.

The treatment was discussed and an MRI and PET scan was booked for two weeks later. They explained they do this to get a complete picture of what and where the cancer was. He had a picc line put in and he had his first lot of chemotherapy on 11 November 2019, literally a month after that first appointment.

The picc lines caused all sorts of trouble. He ended up having different ones put in because they caused him to have blood clots. One of them twisted in his chest and the nurse said she had never seen anything like it.

The early days were awful. We didn't speak about it. It was the elephant in the room. Neither of us slept much and eventually the GP gave us some sleeping tablets.

We got used to the pattern bloods, oncologist, and chemo. And all the time we didn't discuss the cancer at all. I felt like I was screaming inside. Eventually after having a total melt down in front of his nurse, I was referred for counselling. This helped me, although I don't think I spoke more than 10 words the first time. I just sat and sobbed, because crying was a problem for Lenny. He hated me crying. I reached out to people on social media. It helped me. Lenny didn't want to talk about his diagnoses but I needed to. These people, some who have sadly passed are my saviours. They helped me make sense of it and let me ask questions and get real answers.

The first of the blood clots was two months after diagnoses. It was on a Sunday in December and Lenny had a pain under his arm. We rang Acute Oncology and they told us to go to A&E. He ended up with a blood clot, high blood pressure and Atrial Fibrillation. This was the first one. He had three more.

In three months we had attended 35 appointments! It was never ending. And all the time Lenny never spoke about it. January passed with Lenny in a lot of pain, sleeping, not really eating and just generally unwell. He eventually ended up in hospital with an infection and was neutropenic. It just felt so unfair.

In February he was given an appointment from King's College Hospital for the liver metastases to be discussed. We met Mr P and was told that he would do a liver resection in four to five weeks. We went the following week for his pre op and whilst waiting for the train got a phone call from the hospital wanting him to come in that night! Although this was a shock it was probably for the best because neither of us had chance to Google what a liver resection was!

I cleaned and changed all his dressings. Administered all his tablets and kept a running log of everything that was happening to him. I think for me it was a way of me trying to gain some control over our lives.

In March when the pandemic was escalating Lenny received the dreaded shielding text. For us it wasn't too bad. We didn't go out anywhere anyway.

In April Lenny had to have another CT. It was decided three months more chemotherapy. He started again on 28 April. These were tablet form I think so that he didn't have to go into the unit unnecessarily. He became very, very unwell and I wanted to call for an ambulance. He had an MRI booked at King's College for the following morning and really wanted to go and then said we could go on to the Cancer unit after. It was awful. He could barely walk and because of Covid I couldn't go in to help him. We drove from King's College to Guy's and I sat outside for over three hours in the car. In the mirror I could see blue lights flashing and an ambulance stop. A while later they bought Lenny out on a bed and took him in the ambulance to St Thomas'. I followed but they would not let me in. This was the last time I saw him for over five weeks. He had a perforated bowel and this was why he had been in so much pain.

Lenny ended up with a colostomy. I was asked to go into the hospital to learn how to clean, pack and dress his wound. I suspect this was because he was so depressed his lovely stoma nurse Melissa knew that this would perk him up. The shock when I first saw him was awful. He was emaciated and looked 10 years older. I was heartbroken. I shaved him and took him food that I knew he would eat. I dressed his wounds and didn't flinch. For him, I knew it was important that I didn't panic. I was shocked but could not show him. Melissa rang and asked me to go another time because she said it had had such an effect on Lenny's mental wellbeing.

The day I picked him up was fantastic although the journey home was awful. He felt every bump in the road!

I decided that I didn't want a constant stream of different district nurses in our house because of the fear of giving Lenny Covid. It was decided that I could pack and dress his wounds and that once a week the nurse would come in to check. I'm proud of the way I cared for him. It gave me purpose, and focus in a turbulent time.

Lenny has been through so much in such a short time, and you do think 'why us?' but why not? There are so many others who are not as lucky as us. He's fighting, he will always have to fight. We've been told that it will come back, we just don’t know when. The battle may be over, but the war is not won.

Lenny is due is next scan in April 2021. We just have to be positive that it has not progressed or returned.

Lenny is doing ok. He had an earlier scan because he was feeling unwell. This was in late February. Thankfully everything was stable and they said that it will take time to heal from all the surgery and that the aches and pains would take time. He still has neuropathy in his hands and feet, which is a side effect of the chemotherapy that he was last on but this is thankfully getting better.

I think to hear them say that he was stable put his mind at rest. We've come to realise that half the battle is getting your head straight, and not letting the anxiety between scans build.

Lenny still has a port in his chest. This was put in after it was decided that the Picc lines caused him more trouble. We have been told that it can stay in for a year. I think Lenny worries that they won't take it out because he will need more chemotherapy. I tell him it's better to keep it in just in case.

He has spoken to the colorectal team about the possibility of a reversal of his colostomy. This is major for us because Lenny was absolutely adamant that he would never have any other surgery after the trauma of the bowel perforation.

Lenny is back at work now nearly full time which takes its toll physically but mentally keeps him sane. The change here is that I have to go with him as he doesn't want to be there on his own. Luckily it is our own company so we have no one to answer to. He has very little time to stress or worry too much, although we both still have our moments!

His next scan is due on 25 June. We just keep positive and take each day as it comes.

If anything, the diagnosis, the pandemic and the realisation that life is short has bought us closer together and we appreciate each other and life so much more now. 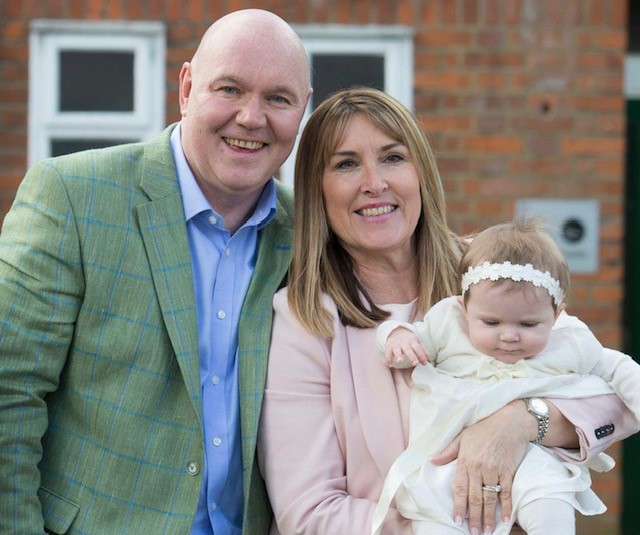 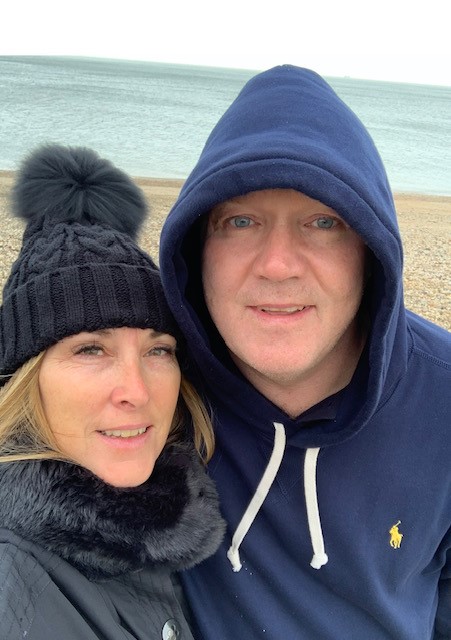 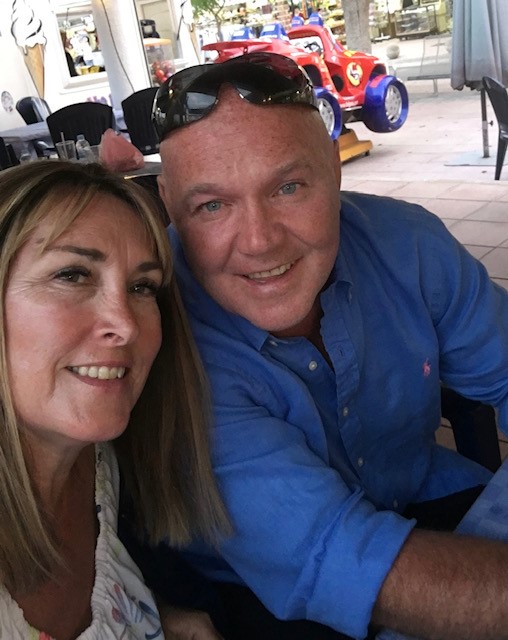 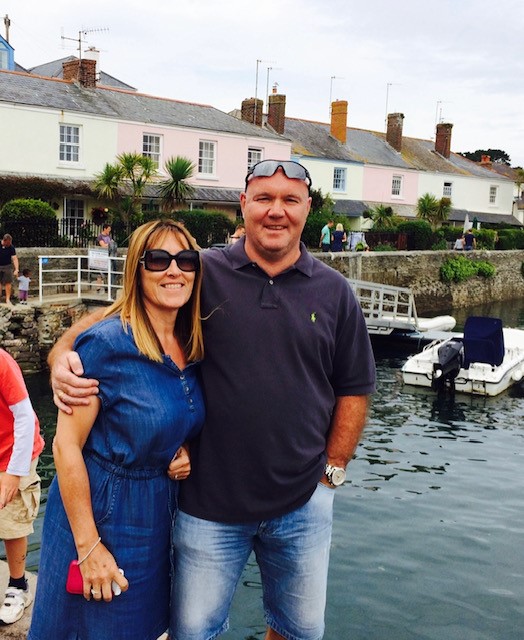