On 8 October 2020, I lost my husband to bowel cancer seven days after his diagnosis at 48 years old.

A few months before his diagnosis he was complaining of not feeling quite right, he had diarrhoea and seemed to be losing some weight off his face but not his stomach. He also seemed more tired than usual.

In August, we went on holiday and he slept a lot but I put that down to just chilling out as he'd always liked his sleep. When we got back he seemed to withdraw a bit, he didn't want to meet his friends for a pint, didn't really want to go out, wasn't in a very good way mentally. Iain was not the best at communicating his feelings and tended to internalise things, but when I think about it now, the way that he was behaving was because he was worrying about his health.

About a month before his diagnosis he had blood in his stools and went to the doctor's where he had a stool test which came back clear. He complained of an 'uncomfortable' feeling on one side. When I tried to get him to come and have a walk with the dog he said it was uncomfortable to go any distance. The symptoms were not going away and he ended up off work after being in pain one day to the point where he thought he was going to pass out. He had some blood tests and a flag came back on the liver.

The doctors then referred him for a colonoscopy and endoscopy which took around two weeks for the appointment. At this point we weren't worried, he was too young to have bowel cancer, it had to be Crohn's or irritable bowel syndrome, there was no way it could be cancer. About three hours after he had gone in for his tests I received a phone call telling me to come in. They had found a large mass in his bowel and the indication was that it was cancer.

I wanted to tell my story because I want to raise awareness and to tell people that if they know that something is not quite right, don't leave it, get it checked out.

The news was absolutely devastating, Iain was terrified, and I tried to hold it together but underneath I was scared. He had to stay in hospital that night and I had to go home and try and process what we had just been told. This was the beginning of my nightmare. I had decided not to tell our ten year old daughter that her dad had cancer until I knew exactly what we were dealing with. I didn't have to wait long. The next day we met with the consultant who confirmed that Iain had bowel cancer and that it had spread to his liver. It was terminal. He had eighteen months to live and that was only if he could have chemotherapy. They would have a multi-disciplinary team meeting in four days' time to decide what to do next. How do you even begin to process this news? The first words out of Iain's mouth were that he wouldn't see Millie get married, it was just heart-breaking.

On top of the cancer he also had a liver infection and would not be allowed out of hospital until they got that under control. I told him that we would face it together and deal with whatever came our way, that there was always hope. Two days later Iain told me that he had been in pain in the night and they were doing another scan on him. I was told to come in after the scan where the consultant delivered the most horrific news. Iain's bowel had ruptured in the night, he now had days to live and was to go into palliative care. The speed of which all this happened was just shocking, some people didn't even know that he was in hospital.

His mum, dad and sister came to see him and spend time with him, and I stayed with him until he passed away four days later. It was the most brutal week of my life and seeing him in palliative care was extremely hard. I did my best to look after him and stay strong for him because he didn't need to see my tears. I had to have conversations with our daughter that no one should ever have to have, and wrestle with the dilemma of how often she should see him. She ended up seeing him twice. The first time she saw him she had just been told the news, it was rushed, and she wasn't ready to say goodbye. The second time she saw him was the day before he died. It was her choice, and she needed that time to see that he couldn't be fixed and to say goodbye to him. I wanted to tell my story because I want to raise awareness and to tell people that if they know that something is not quite right, don't leave it, get it checked out. Blood in the stools is not the only symptom, don't feel like you're wasting anyone's time, go and see the doctor, insist on blood tests or a colonoscopy, don't leave it thinking that it will go away.

We miss him every day and on the first anniversary of his death I took Millie into Manchester to show her some of his old haunts and buildings that were significant to him. It felt like a positive day of celebrating his life in the city that he loved, and I know he was there with us in spirit. 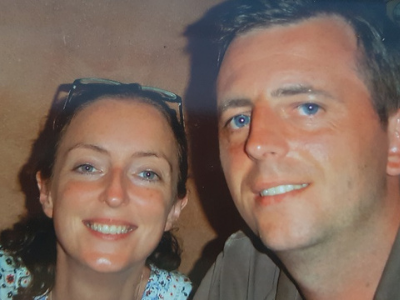 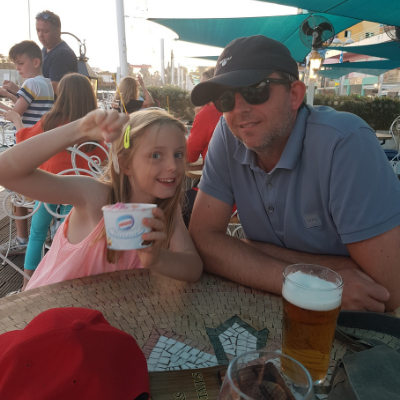