My husband Stuart, father of five was diagnosed with palliative bowel cancer aged 37 in October 2020.

Five weeks before my husband's diagnosis he had been back and forth to both his GP and hospital with abdominal pain and fatigue, which he put down to working hard and having five children at home. However, they kept telling him that he was constipated or had an infection and prescribed him laxatives and antibiotics. This went on for three weeks until he was given an x-ray in A&E. They told him they could see something but it looked like just gas so he was sent home.

On 30 October 2020 Stuart was so poorly he couldn't eat or drink and he kept vomiting and was in and out of consciousness. We got him to hospital but due to COVID I wasn't allowed to be with him. He was given pain relief and fluids then scanned the next morning. On Halloween 2020 my husband was alone in the hospital when a doctor broke the news to him that he had a large bowel tumour and needed to have a tube put in his nose and then a stent put in his bowel. My husband didn't know what to do and rang a family member to break the news to me as he couldn't tell me. I then rang the hospital and pleaded with them to let me visit my husband which they did.

My husband was also diagnosed with Lynch syndrome which was picked up on genetic tests but he is the first person in his immediate family to have a bowel cancer diagnosis so this came as a surprise.

In December 2020, my husband started on neoadjuvent chemotherapy for three months and this shrunk the tumour enough for a left hemicolectomy to be performed which was done on 19 April 2021. My husband had a 10cm tumour removed along with 19 lymph nodes one of which contained cancer so he then had to have three months of chemotherapy again as a mop up treatment.

Three cycles into the chemotherapy my husband had a CT scan which revealed that unfortunately cancer had returned to the outside of his bowel wall and also in several para aortic lymph nodes. He was told he was no longer able to have any surgery or chemotherapy and is now palliative but he is having immunotherapy nivolumab to hopefully keep the cancer stable and prolong his life.

Our lives have completely changed since Stuart's diagnosis. My husband has gone from being active working 40 hours a week, fit and healthy to being bed bound a lot of the time due to pain and fatigue. Life is hard trying to keep 'normal' for the children and carry on with normal life when you are breaking. The hardest part is I have become my husband's carer as well as working part time and caring for our children.

My employer and my husband's employer have both been fantastic. The support we have received has been amazing. My husband's employer still continues to pay him his weekly wage and often calls and visits us at our home to see how things are going. My employer has been very supportive also if I need time off for whatever reason they are fine with that and I have great friends at work that have been so supportive.

We are hopeful that the nivolumab immunotherapy slows down the progression of the cancer and keeps the tumours at bay. My husband's next scan is in November 2021 and we are keeping everything crossed as our five children need their daddy around. 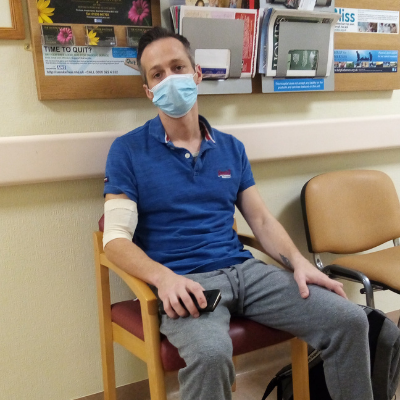 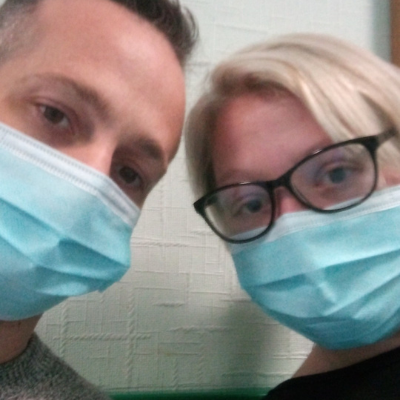