In October 2020, my fiancé and mother to our young daughter was diagnosed with bowel cancer at the age of 36.

Our daughter Amaya was born in June 2020. This was her first baby and Kerry at the age of 35, couldn't have been more excited. She really did take to becoming a mother like a duck to water and although exhausted, as any new mother would be, she was always happy.

In late August 2020, she called me and said she had been bleeding. At the time I presumed it was from having Amaya and didn't even know it had come from her bottom. However, because of the amount of blood an ambulance had come to the house and she was taken to hospital. She spent the night there and came home early the next morning saying the doctors had told her it was down to a tear. We thought nothing of it. Kerry then started to feel exhausted a lot more than normal, even with a new born baby. But still we thought she'd be OK. She sent me off to buy iron supplements and we carried on.

She bled again in October but she was told by the doctors it was down to piles. However, Kerry then fell over whilst carrying Amaya up our stairs and at this point we thought we're going to get this sorted once and for all. I remember saying to her nothing can be worse than how you are feeling, so let's go back to the doctors.

Kerry was referred for a CT scan whilst I was at work and we were expecting a diagnosis of Crohn's. However, I received a call that I needed to get to the hospital. The doctor sat us down and said they had found a tumour in Kerry's bowel but not to worry because it was in an 'ok' place. She was then booked in for an emergency MRI. She had it and the next day she saw on her NHS app that we’d been booked in for a consultation with a surgeon. I remember talking to her on the way up to the hospital. I said she didn't need to worry because if it was serious we'd be talking to an oncologist and not a surgeon.

The surgeon sat down on the chair opposite Kerry and said I'm afraid it isn't good news. They had discovered a tumour in her bowel and lots of tumours in her liver. There was a pause of utter shock, Kerry burst into tears and I was sick in the sink. They said they were eager to start chemotherapy straight away. But firstly they wanted to fit Kerry with a stoma to relieve the pressure on her bowel tumour. She went in the next day for the operation. Those five days were extremely emotional. The realisation of what was happening suddenly hit. Once Kerry came out of hospital I remember just hugging her for an hour and us both sobbing. How could this be happening?

Kerry had her first round of chemotherapy just before Christmas. She didn't react well but they persisted saying it was the 'gold plated' chemotherapy. She had a further two bouts of chemotherapy but was just getting more and more poorly. By this point she'd lost so much weight. She was then taken into hospital at the start of March with an infection to her bowel. After two weeks of no visitors, due to COVID restrictions, she also wasn't able to eat for a week and she had become so thin she was almost unrecognisable. Kerry's oncologist had spoken to her and said they'd be stopping the chemotherapy. Kerry told me this over text as she was too upset to actually say the words out loud. She felt that they were just waiting for her to die. We moved her to a hospice as they couldn't do anything more for us. We were allowed to visit every day and I was allowed to have sleepovers a couple of times a week. It was lovely just sleeping next to her again. Kerry took a bad turn on 23 April and died on the 25 April one day after our anniversary. Myself and her sister were by her side. She fought the toughest battle for six months and we miss her every single day. Our daughter now points to the sky and says Mumma sky. 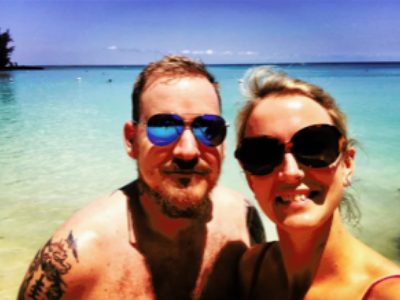 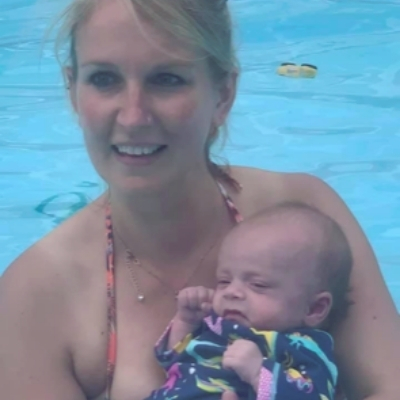