I will never forget that day. I have tried to but the truth is, maybe it is important not to forget it, as it has shaped who we are – whether we like it or not!

The day that I am referring to was Fathers' Day in 2017, but unfortunately, that is not what made it memorable! After finding blood where he shouldn't have and suffering discomfort and stomach pains for a while, Dan, my boyfriend at the time, had been referred to hospital for a colonoscopy (a camera that looks around the large intestine). He had trialled and tested different diets to help with irritable bowel syndrome (IBS), was issued with different medication, but nothing seemed to work. It was believed that he had some sort of inflammatory bowel disease and a colonoscopy would help to identify this, so the GP referred him.

On THAT day, I was sitting in the waiting room reading and trying to get some marking done for a Year 10 class I had that week, when I was called in by a lovely nurse. She said that the doctor needed to speak to us both together, so I just assumed that they were going to advise on new medication that Dan would need, or perhaps diet, foods to avoid, etc. On reflection and in hindsight, I look back and remember that she gave me 'the look'; that sympathetic look that people do subconsciously and the classic head tilt to show how sorry they are.

I was taken to Dan who was in his rather fetching hospital gown – still my handsome fellow though of course! – I had never seen him look so vulnerable and pale:

'I don't think that it's good news Charl' he said in a trembling voice as I leant over and hugged him.

Obviously, I knew that this was not going to be easy from Dan's reaction, but when the consultant returned and told us that it was THAT word, I can honestly say that I now know how it feels to be numb (a contradictory phrase I know, but truthfully, that is how I felt).

What? 28 years old and has cancer? My Dan had CANCER? It's strange because I have never viewed myself as a practical person but I didn't get upset initially; instead I went into full rational thinking mode and asked about the prognosis and next stages. The consultant and nurses explained the next steps. 'Biopsy results', 'CT scan', 'surgery' were words and processes that were outlined to us and things that we would have to get very familiar with very rapidly.

'When it rains, look for the rainbow.'

Telling family and friends was an immensely difficult thing to do and just extremely surreal, but the irony was that we had a lovely week leading up to the CT scan and then the surgery. We made sure that we were busy catching up with friends and family, occupying our time and minds. None of us are people who like to mope, we're quite the opposite and one of my many favourite things about Dan is that he is always happy and great fun to be around. As a couple we laugh A LOT, and that was not going to change!

Two people who particularly stood out to us amongst a dark time, were my sister and brother-in-law, Laura and Josh. The day after that dreaded afternoon they suggested we went out for a meal to one of our favourite places. They fibbed about having a voucher to use, but we now know that they just wanted us to have a normal, fun evening out… and that we did! We laughed a lot and didn't talk about THAT word much at all. Instead, it was regular conversations about work and of course, their wedding, which was to follow two months later. It was the best therapy that we could have asked for.

Two days after this Dan suggested that we went for a walk. We are fortunate that we live in a lovely village with fields at the back of our house, so we do not have to venture far to enjoy some lovely countryside scenes; our happy place and haven. It was 21st June, the longest day and just approaching dusk. We held hands, as always and I was chattering on about something when Dan said to me: 'You know, you really have been amazing these past few days.'

I just laughed and said that was not the case, but the next moment Dan was down on one knee with an open box in his hand displaying a beautiful ring inside! Of course, I said yes! (Well, in truth to make light of the situation I initially replied with: 'I THINK so!' but I meant 'Yes!'). I gave him the biggest hug and was in such shock! I wondered why he had hastily moved my hand out of the way when I tried to put my arm around him moments earlier! Sneaky devil.

What a wonderful, special moment amongst a very sombre time! When I asked him why he had decided to ask me at that moment and that day, he explained to me that he had been saving for a ring for several months. He had planned to propose in Sorrento in August, where we were due to holiday, but of course something had come up, so plans had changed! Dan said that he did not want anyone to think that he was proposing just because of recent events, but the trigger to bring it forward had been when the consultant days before had asked if any relatives had accompanied him to his appointment. When he had replied with 'yes, my girlfriend is here' he thought that I was much more than that and he knew that the question had to be asked soon! Not wanting to upstage my sister before her wedding Dan asked her and her fiancé's permission, as well as my parents. The bubbly was rapidly flowing and we celebrated with a family gathering at my parents' house that weekend.

We received lots of lovely messages, but I will never forget what one friend said: 'even in the worst of storms, you WILL find the rainbow.' Cheesy quotes are not Dan's thing, but this resonated with us both. Very appropriate indeed.

The CT scan was a week after the diagnosis and the results of that were a few days following. It was confirmed that it was cancer, which we had known, but the good news and huge relief was that it had not spread to other organs. Dan was to have a big operation, known as an anterior resection (where a large section of the large intestine is taken away) on 3rd July, two weeks after diagnosis. Everything was moving along very quickly.

Leaving him that morning was just awful and very emotional. We had remained positive however, and I just knew that it would be ok. I had prayed a lot and was fortunate that a lot of family and friends had us in their thoughts and prayers, but it was still horrible saying good bye to him at the ward. Moments later he sneakily text me a photo of himself in his surgical stockings! He was still making jokes despite feeling so incredibly scared.

At lunchtime I received a personal phone call from the surgeon and consultant whom we were getting to know very well. He told me that the operation had gone to plan and that we could visit Dan later that day, but warned me that he would be tired and groggy. It was stage 3 bowel cancer, but the surgeon has managed to remove the cancer and some surrounding lymph nodes that he did not think looked 'great'. There was a chance that Dan would need a colostomy bag, but in the end this was actually not required.

Making the phone calls and sending the millions of WhatsApp messages to friends and family following that phonecall made me feel SO happy inside and not to sound cliché, but I really did imagine that this was what winning the lottery must be like only much, much better!

Dan recovered well and was fit and well for my sister's wedding in August, which was the most special day! We decided when he was given the option, which he would have chemotherapy as a precaution, so had a total of three months of treatment and prior to this we were referred to for fertility preservation, due to potential side-effects.

It was not always plain sailing; sometimes Dan would feel fine after the treatment and after some sessions he was not well at all, but again we met more amazing people within our NHS who were just fabulous and took good care of Dan, and myself! They are angels.

We know that there is still a road ahead, but we know that we are also over the biggest bumps and hurdles in this 'blip' that life has thrown at us. We personally, don't like the phrase of 'beat it' as we have both lost loved ones and friends to cancer and appreciate that not everyone gets through this. We feel incredibly blessed for the care that we received under our fantastic NHS and the support from friends, colleagues and of course our amazing family was wonderful! Also, Dan's Police family within his shift all took part in the Three Peaks Challenge just before Dan was due to start his treatment, raising over £2,000 for charity. It is things like this and the generosity, kindness and warmth from dear people in our lives, that has truly astounded us amidst a very hard time.

Some people may question why I decided to write this and bring up rather raw memories, but we feel passionately about raising awareness and helping others. I ran the London Marathon in 2019 and it seemed appropriate to fundraise for Bowel Cancer UK as a thank you, but both Dan and I now feel that by sharing our story we can just maybe help others who may need it in a more practical sense – whether it's advice, answers to questions, information about side-effects or just by giving hope.

Truthfully, it was a long time until we could both say the word 'cancer', but we really do hope that we can support other people and particularly young couples who may be going through the same 'journey' – a word that you will hear a lot! The support that we received from the Bowel Care Team at Royal Stoke and the medical team were just wonderful.

Dan amazes me every day. He always has, but his resilience, strength of character and consistently good humour shines out of him even brighter now. I know that nothing will break us, as together we make a great team who can get through anything. Laughter and love are the BEST medicine.

12 months after the diagnosis we were married and I am blessed to be his wife. We are now approaching Year 4 in the 'journey' as they say and look forward to making more memories with our puppy, Hetty and our new nephew in particular! 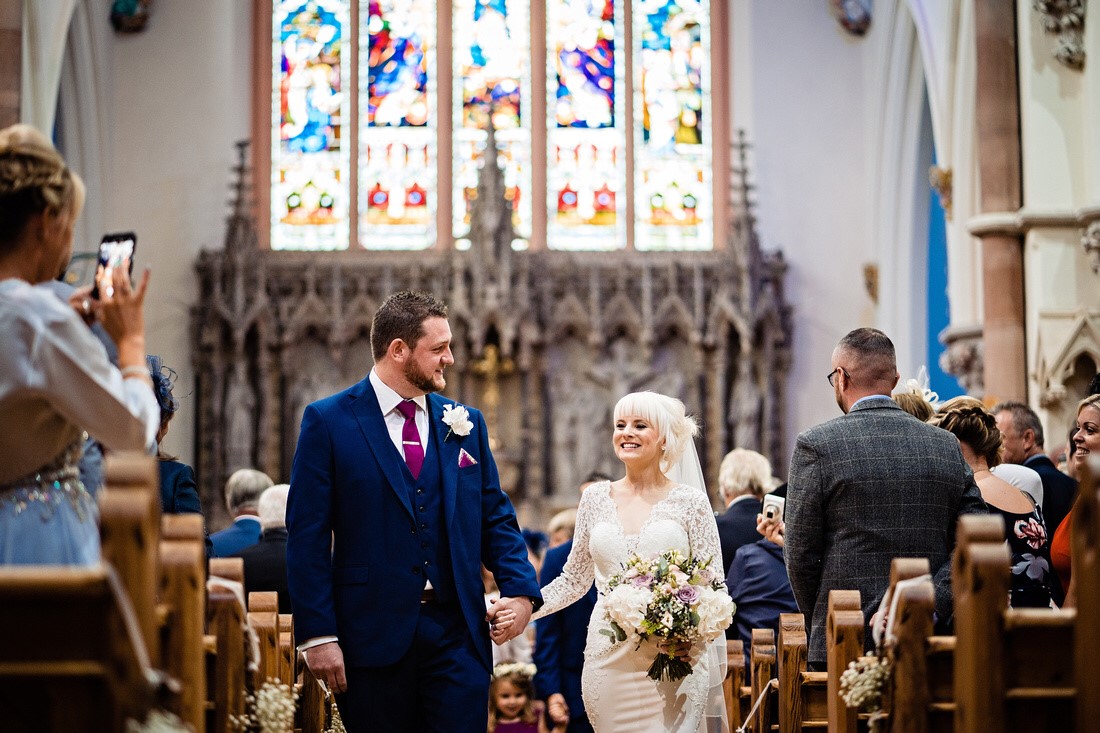 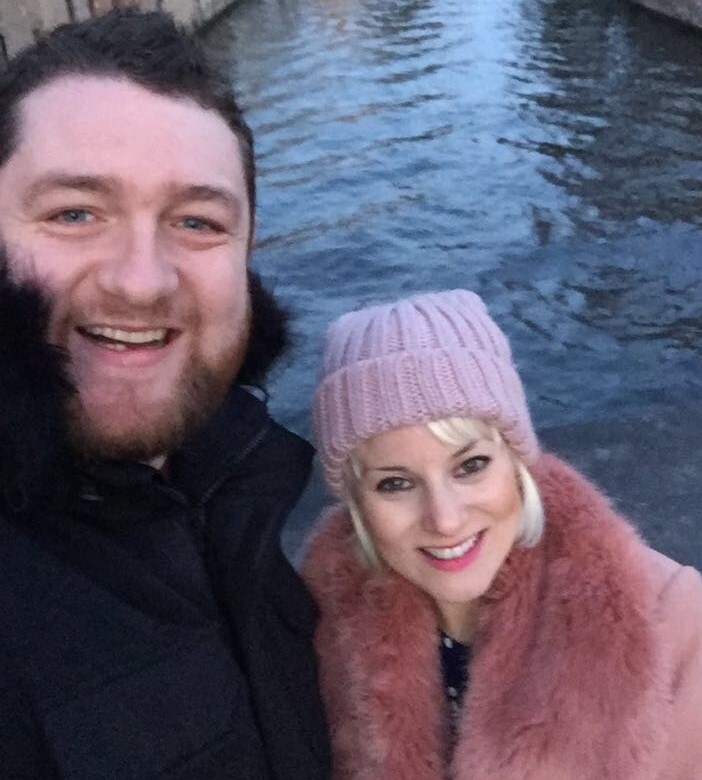 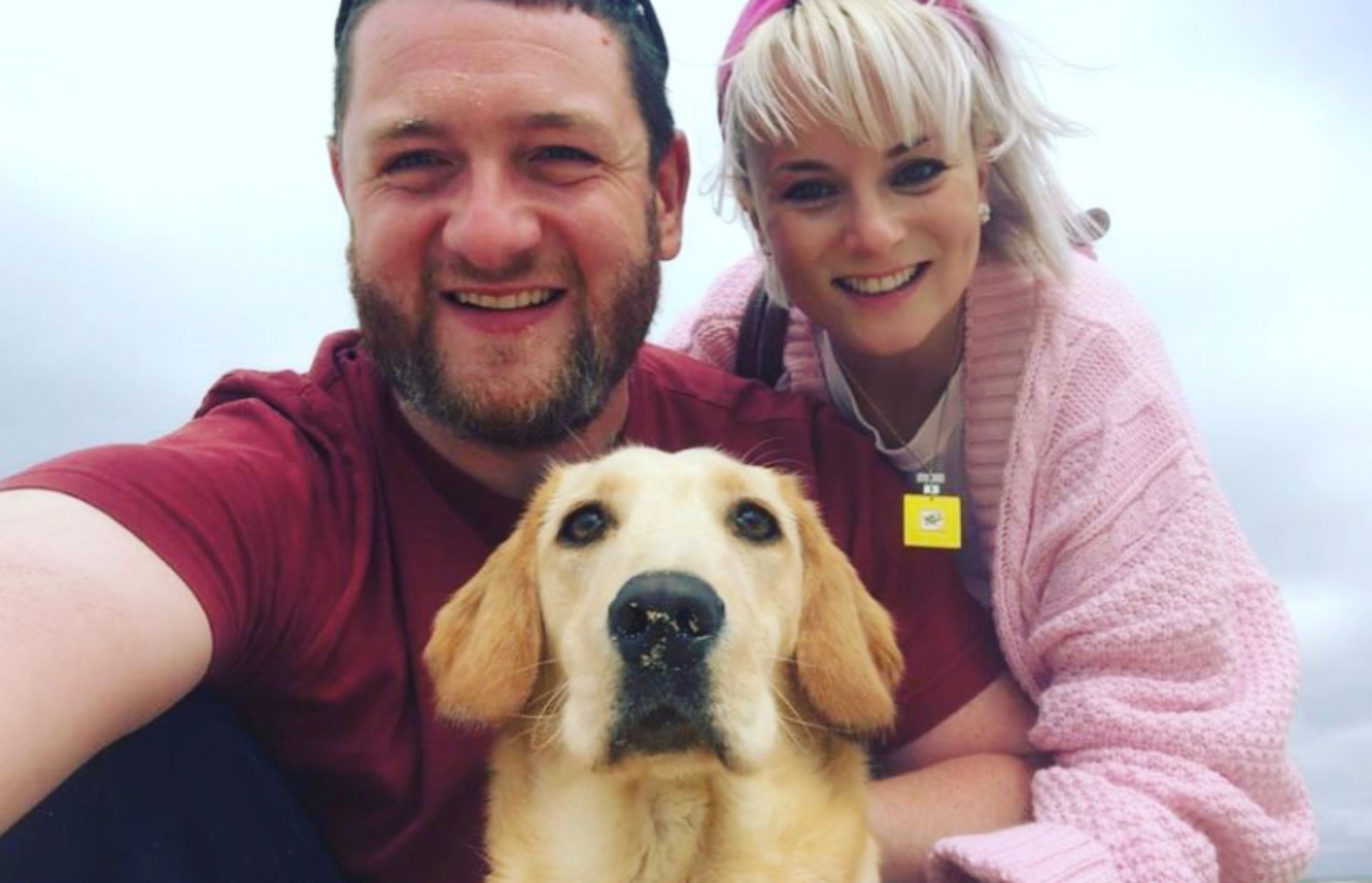 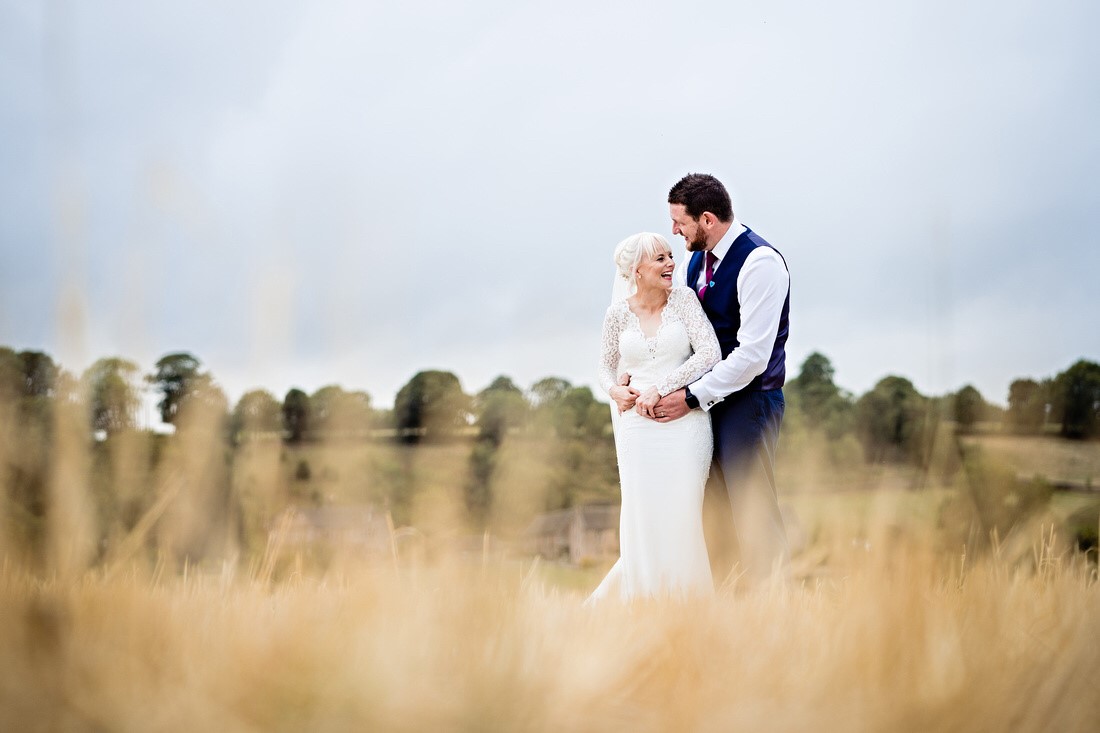