My husband Michael, or Mick as I like to call him, celebrated our Ruby wedding anniversary in August 2019, but we didn’t feel like celebrating as Mick was diagnosed with bowel cancer 13 days beforehand.

For a long time Mick thought he was gluten intolerant, and like most people self-diagnosed and cut out all gluten from his diet. However in July 2019, he discovered a lump in his neck and went to see the GP. She took his concerns very seriously and referred him to the ENT clinic for further tests. He quickly had a biopsy and in August we were told that he had bowel cancer. We were in complete shock – we never thought it would lead to cancer, let alone bowel cancer. He didn’t have any of the classic symptoms, we thought he would have blood in his poo. He even did his bowel screening test three years ago and the results came back negative.

He had a CT scan from his neck to pelvis and then later in August we saw the bowel surgeon. He told Mick it would be keyhole surgery and that he would not need a stoma. We came out of there feeling really positive.

A couple of weeks later we saw the oncologist for the first time and that’s when it all went drastically downhill. A junior doctor was in the room as well, and when the oncologist examined Mick she spoke to the junior doctor as if we, along with my daughter, weren’t in the room. The first time we found out that Mick was terminally ill is when she said to the junior doctor, he has got years not decades. My daughter and I just looked at each other in complete shock. Everything after that did not go in, the oncologist had no empathy and didn’t even ask if we wanted to ask any questions. We felt like we were on a conveyor belt and she wanted us out ready for the next patient. It was horrendous.

We were due to go on holiday to Gran Canaria at the end of September, luckily for us the hospital allowed us to go. But I think the plane journey wasn’t good for him as after a couple of days he became dehydrated and had to be put on a drip for a couple of hours. It wasn’t the best holiday but we still had some laughs and some good memories, it would be his last holiday.

When we returned home on the Friday it was straight to the hospital on the Monday for another CT scan and two days later he had his port fitted and the next day he started his chemo. He was never given surgery, not sure why – it's something I am hoping to find out.

On the 21 October we had an appointment with the oncologist and she was pleased with how things were going and said his lymph nodes were back in normal range, whatever that meant. She wanted Mick to have 12 rounds of chemo with a targeting drug which she told us was very expensive. So he had chemo every other week and had his last chemo on the 12 March. It was tough, he felt sick, it affected his taste buds and his skin became very dry, so much so that he had to see the dermatologist and was given cream because his eyelids became very dry. In the end the chemo dosage was reduced.

On the 11 March he had another CT scan and his last chemo on the 12 March. The scan revealed that the chemo wasn’t working and that the tumour was growing.

We were meant to have an appointment with the oncologist on the 25 March, which was turned into a telephone call. She said because the tumour had grown they would have a meeting to discuss what action to take. He had a phone call on the 2 April to say they were uncertain of the benefits of further chemotherapy treatment and because of coronavirus second line chemotherapy can only be used in exceptional circumstances therefore Mick would have a break from treatment. They would contact him again on the 10 June to see if he would have another CT scan. This came as a complete shock as we thought the chemo was working. This would be 11 weeks before they got in touch and knowing the tumour had grown and not given any other medication was scary. They even wanted him to have his port taken out. He said no because he thought he would have more treatment.

It was on my 60th birthday that I noticed Mick’s eyes were yellow. It was a Friday so had to wait till the Monday to phone the GP. He had an ultrasound on the Thursday but that was inconclusive so went back the next day for a CT scan. Because of coronavirus I had to drop him off at the hospital and couldn’t go in. I waited all day and thought it was funny that I hadn’t heard anything but when Claire my daughter and Mick pulled up on the drive I knew it was not good news. Mick had been told the devastating news that he only had weeks left to live. It had spread to his liver and abdomen. There was nothing more they could do. He was told this news all by himself, Claire said she would never forget the look on his face, he would not see a doctor again. He was sent home with no medication.

Mick decided not to go into a hospice because of covid so myself and Claire looked after him. It was extremely difficult watching him deteriorate, he lost weight rapidly and was skin and bone apart from his belly which became extended. We spent the last few days of his life trying to keep him comfortable. He couldn’t go to the loo, he couldn’t eat, we kept changing his medication, things were brought to the house to make life easier, even a hospital bed – we had to clear out Claire’s bedroom to make room for it. He slept in it for one night before he died on the 26 May 2020.

Life has not been the same since. Mick was made redundant in 2017. I was still working three days a week so he was doing the cooking and the cleaning. The only thing he wouldn’t do was the ironing, he was also the driver but I can drive just not keen. We had a caravan in Cromer so would visit there from Thursday to Sunday. When we found out that Mick had cancer we got a puppy to take our mind off the C word but this meant having to leave the caravan site as they didn’t allow dogs so we had to move sites. This meant we would have to leave the many friends we had made there but we were literally moving up the road to a site that would allow dogs. We spent a week there then lockdown happened and he never got to stay again. I am going to sell it, it’s not the same without him. It just doesn’t feel right.

When I turned 60, I was meant to have a party combining my birthday and retirement celebration. Claire also knew that our friends from Australia were going to make a surprise visit at the party, we hadn’t seen them for over 20 years. That obviously got cancelled due to lockdown, but I am now retired.

While in lockdown we decided to book a holiday to the Lake District, Mick was looking forward to this, with the kids and grandkids and my son has a kayak and with the dog for lovely walks. Sadly he never got there but the kids and I did go and we had a lovely time. We were lucky with the weather and the dog learned to swim too. It was amazing, so much so we have booked to go back next year!

So there wasn’t a lot of clapping for the NHS in our house. I’m angry with the lack of empathy from the oncologist. Why didn’t he have the surgery? If Mick had gone to the doctors when he thought he was gluten intolerant maybe things would be different now, who knows. Please don’t self-diagnose, visit your GP instead.

There are lots of firsts like the holidays without him, birthdays, and now Christmas. I miss him, he was like my comfort blanket and he isn’t there anymore. 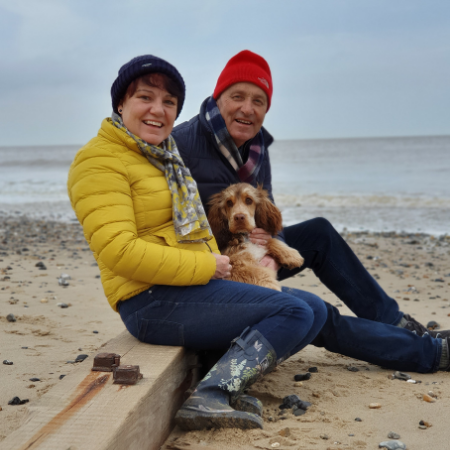 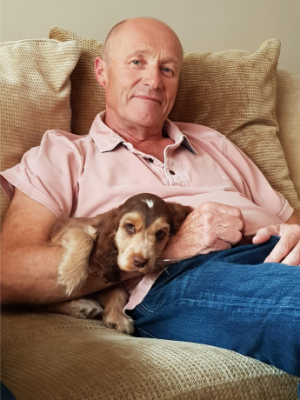 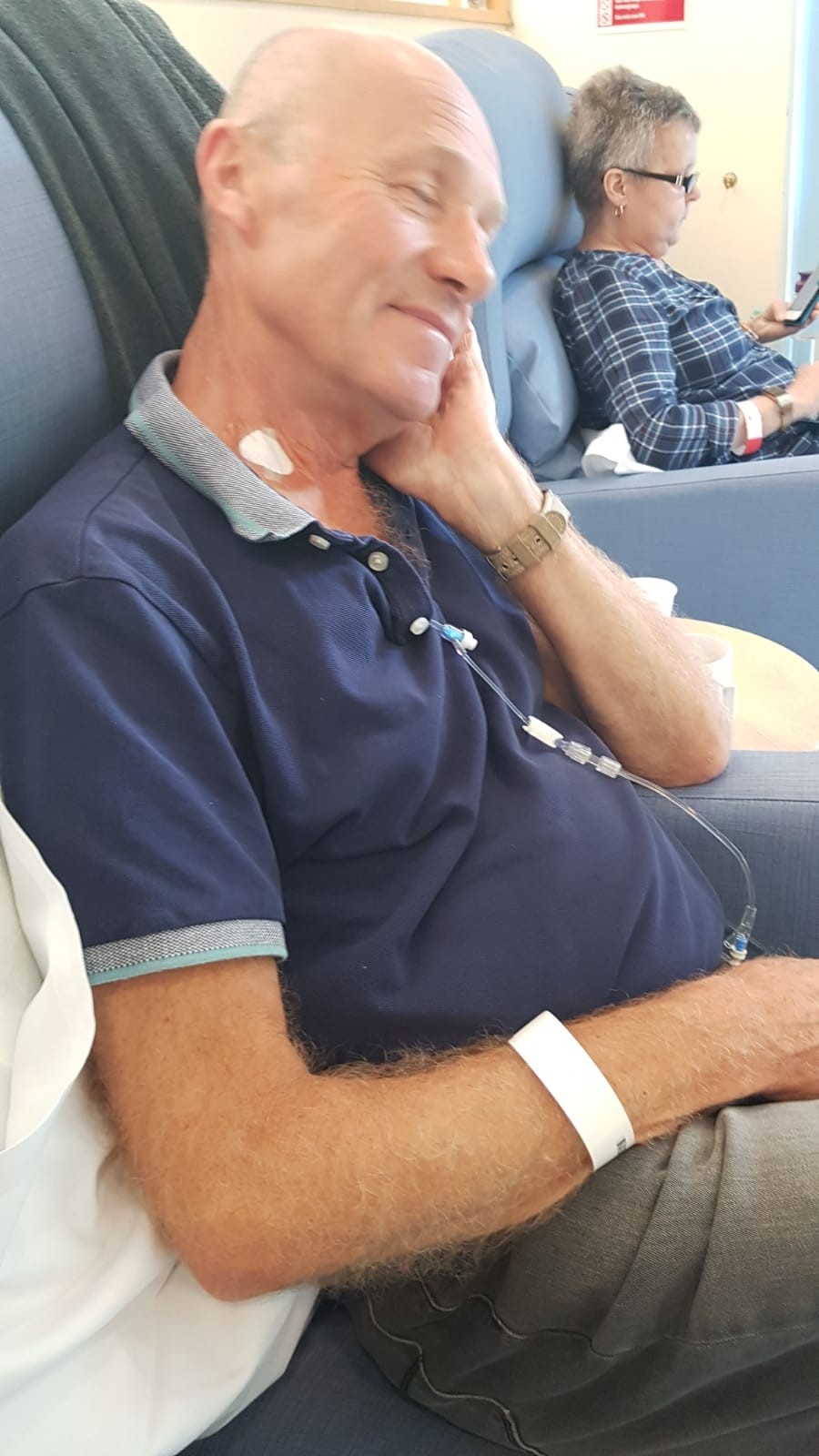 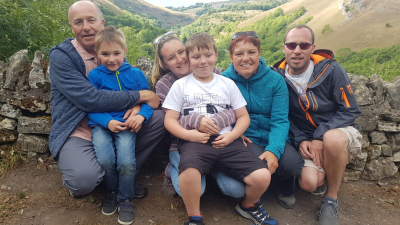