My father was just 31 when he was diagnosed with bowel cancer in November 1998 and I was just six months old.

At the time, my family was planning to visit Australia for the wedding of my father’s sister, but a consultant at Prince Charles Hospital, advised against the trip, as he needed surgery ASAP. The consultant didn’t even want us to wait until we returned from the two week trip. My father had surgery within days of his diagnosis and we missed the wedding.

It was very difficult as the rest of the family, including my grandparents, were in Australia for the wedding, while he was in hospital having major surgery. During surgery, medical specialists discovered the cancer had spread to his liver and stomach.

After the surgery my mother was told that the cancer was terminal and that chemo would only add a few months to his life.

My father died just before my second birthday on 30 December 1999.

The outcome might have been different if his GP had noticed symptoms of bowel cancer earlier.

My father was bleeding from the back passage when he initially went to the GP, who told him he had piles. He then had stomach pains and when they started to increase he returned to his GP who told him he had IBS. My father was sent home without medication. A few more months passed and he started losing weight. One day my father lost a lot of blood while on the loo and so he returned to his GP, who then discovered that he was low in iron. It was only after this visit that he referred him for a colonoscopy (a medical procedure conducted to look for signs of bowel cancer or colon polyps).

Sometimes I get angry that the GP didn’t recognise the symptoms of bowel cancer sooner and that I missed out on having a loving father.

My mum brought my older brother (now 26) and me up on her own. She worked full time so that we could have a good life. While bringing us up I saw how she struggled with her grief and her loneliness.

There is a history of bowel cancer in my family. Four close relatives, including my grandmother and auntie had the disease, but beat it. My grandmother, who is in her 80s was having tummy troubles around the same time my dad was experiencing stomach pains, but her cancer was caught early and it never came back. In December 2019 I was tested for Lynch syndrome, a genetic condition which increases your risk of cancer, including bowel cancer. Because of my family history I will start being tested for bowel cancer when I turn 25 and will have regular testing for the rest of my life. 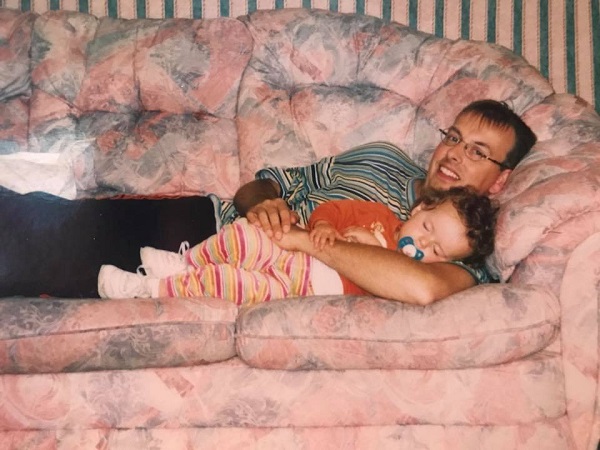