I will never forget that day when he told us that there was a lump on his stomach, but he assured us that he'll be fine after a small operation. He was a very proud man and never wanted to show me and my brother any signs of weakness. He never said it was cancer but I think that was because he didn't want us to worry. I think him and mum knew the severity but for the sake of me and my brother they remained optimistic.

I remember him having a couple of operations and going through chemotherapy. He was in and out of hospital but when he was home having treatment he was pretty much in bed bound. One day I saw him walking to the toilet and he'd lost a lot of weight – he was all skin and bone, and that was the first time I thought he was seriously ill and he may not have long to live.

Eight months after he was diagnosed with bowel cancer, he died – aged 51.

Losing my dad at 14 was something I initially didn't cope with very well. I bottled up all my emotions and didn't want, or liked to, talk about it. I was going through exams at school, so it was a very overwhelming time. I struggled with anger, which was very difficult for my mum to deal with. However I'm now in a position where I'm comfortable talking about dad, and I'm happy to help others going through the same pain and hurt that I did.

I wanted to do something to mark my dad's 65th birthday and since his passing in 2007, I've regrettably never done any fundraising in his memory. Therefore from the 1 March 2021, I will be running 1km per calendar date, for example my first run on the 1 March I ran 1km, and on the 2 March I ran 2km – on the last day of March I will run 31km. It's a total of 496km in 31 days. I've named the challenge 'Every day for Dad' and I'm hoping to raise £2,000 for Bowel Cancer UK – I'm nearly half way there. 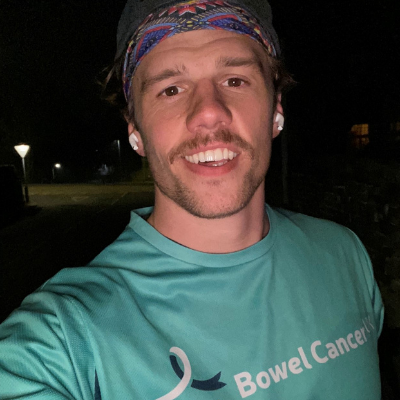