The type of surgery you have will depend on where your cancer is, what size it is and whether it has spread to other parts of the body. If your cancer has spread outside the colon or rectum, read our information on treatments for advanced cancer.

If you have a very small, early stage cancer, the surgeon may remove it from the lining of the bowel in an operation called local resection.

The doctor uses a flexible tube with a light at the end (a colonoscope or sigmoidoscope) to remove the cancer from the colon or rectum. They also take away some of the tissue from around the cancer to make sure no cancer cells are left behind.

A doctor, called a pathologist, will look at the cancer cells under the microscope to see how normal or abnormal they look. This is called grading the cancer. If the cancer cells look very abnormal and your cancer specialist thinks the cancer may have spread into the lining of the colon or rectum or to the lymph nodes, you may need a larger operation to remove more tissue.

The surgeon will remove the part of the colon that contains the cancer and the nearby lymph nodes. This is called a colectomy.

The most common types of surgery are described here. Your healthcare team can give you more information about the type of surgery you will have or have had.

If the cancer is in the left side of the colon, you will have a left hemi-colectomy. Depending on where exactly the cancer is, the operation will remove a variable amount of the colon and lymph nodes.

Once the cancer has been removed, the surgeon will join the remaining ends of bowel together using stitches or staples if possible. This join is called an anastomosis.

Some people need to have a stoma. This is where a section of bowel is brought out through an opening on your stomach area (abdomen). This part of the bowel then empties into a bag which is stuck onto your skin (stoma bag). This then involves you regularly emptying or changing this bag. You may have a temporary stoma to let your bowel rest after surgery. Some people may need a permanent stoma, for example if the remaining ends of bowel can’t be joined together.

After the operation, your surgeon will have more information about the size and spread (stage) of your cancer. A doctor, called a pathologist, will look at the cancer cells under a microscope to see how normal or abnormal they look. This is called grading the cancer. You may have chemotherapy after your surgery if the cancer has spread to the lymph nodes or there is a high risk of it spreading to other parts of the body.

If you have a small, very early rectal cancer or if you can't have major surgery, your surgeon may offer you a local resection. This is called transanal endoscopic mircosurgery (TEMS) or transanal minimally invasive surgery (TAMIS).

The surgeon passes the surgical instruments through the back passage (anus) so you will not have any cuts in your stomach area (abdomen). The surgeon uses the instruments to remove the cancer and the surrounding healthy tissue, to make sure that no cancer cells are left behind. If the surgeon can't remove the cancer this way, they may need to switch to a larger operation. If there is a chance of this happening, your surgeon will tell you before your operation.

If you have a stage 3 or stage 4 cancer, your healthcare team may offer you other treatments before your surgery. You may have a short course of radiotherapy or you may have radiotherapy together with chemotherapy (chemoradiation). These treatments shrink the cancer, making it easier to remove, and reduce the risk of it coming back. In some cases, these treatments shrink the cancer so that it cannot be felt anymore. If this is the case your doctor will talk to you about whether you would like to have the area removed or regular checking of the area.

If the cancer is in the rectum or the sigmoid colon, you will probably be offered an anterior resection. In this operation part, or all, of the rectum or sigmoid colon is removed together with all the surrounding fatty tissue and the sheet of tissue that contains lymph nodes and blood vessels (mesorectum). This reduces the risk of the cancer coming back. This technique is called total mesorectal excision (TME). TME is the gold standard (best) treatment for cancers in the rectum and is performed by all surgeons in the UK.

Depending on how much rectum your surgeon has removed, you may need to have a stoma for a few months after the operation to let the bowel heal.

For cancers in the lower part of the rectum, the surgeon will remove most of the rectum. They will join the end of the colon to the anus. This join is called a colo-anal anastomosis. Sometimes the surgeon uses the end of the colon to make a pouch, called a J pouch (colo-anal J pouch surgery) This acts like the rectum to store bowel movements before you go to the toilet. You may need to have a stoma while your bowel heals. In most cases, the stoma can be reversed after a few months. 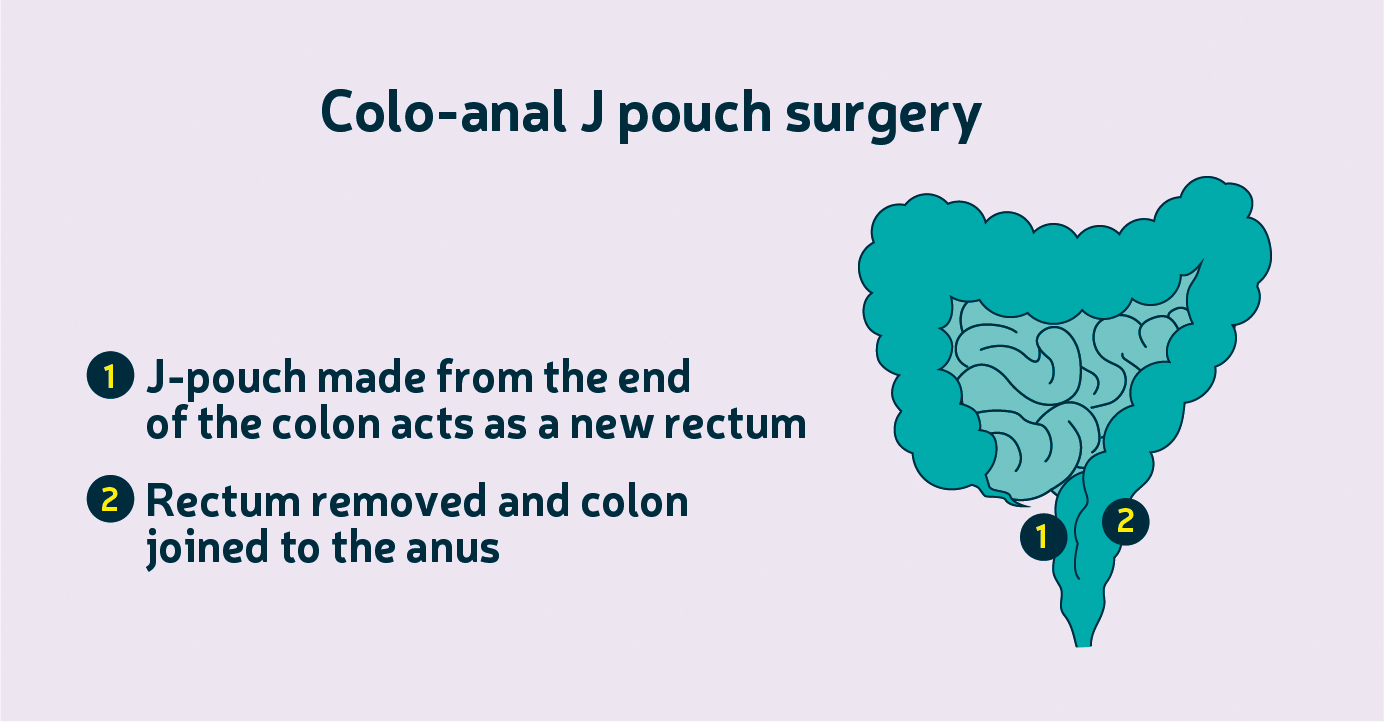 Your surgeon may offer you a choice of open surgery or keyhole (laparoscopic/robotic) surgery. You may not be able to have keyhole surgery if you are very overweight, if you have had surgery to the stomach area (abdomen) before or if you have advanced disease.

In open surgery, the surgeon will make one opening from just below your breastbone down to just above your pubic bone. In keyhole surgery, you will have three, four or more small openings in your stomach area (abdomen). The surgeon puts a long, thin tube with a light and camera (laparoscope) through one of the openings. This lets the surgeon see inside your abdomen. They pass surgical instruments through the other openings to remove the cancer.

Open and keyhole surgery have similar results when they are done by an experienced surgeon. A keyhole operation usually takes longer but you may recover more quickly. Sometimes the surgeon will need to switch from keyhole to open surgery during the operation. Speak to your surgeon about the risks and benefits of both types of surgery and which option is best for you.

Surgery for a blocked bowel

Sometimes cancer can block the bowel, stopping bowel movements from passing through. This is called bowel obstruction. It can cause pain, bloating and vomiting (being sick). If this happens you will need to have an operation as soon as possible.

The surgeon may unblock your bowel by putting in a hollow, expandable tube called a stent. This holds the bowel open so that bowel movements can pass through. The stent stays inside your bowel. You may have another operation later on to remove the cancer.

Another option is for the surgeon to remove the part of the bowel that is blocked. You may need a temporary or permanent stoma afterwards.

If re-joining the bowel is too risky and the blockage or damage is in the left side of the bowel, your surgeon may remove the sigmoid colon and the top part of the rectum. This is called Hartmann’s procedure. You will have a stoma, which is usually permanent but in some cases can be reversed. Your rectum and anus will still be in place.

If the surgeon isn’t able to remove the blockage, you may have a temporary stoma until you are able to have further treatment. 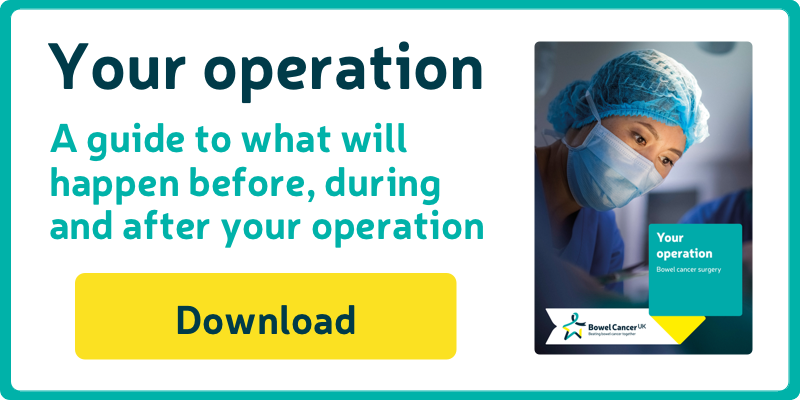 Back to 'Treatment'  Go to 'Preparing for surgery'