Bowel cancer is very treatable but the earlier it’s diagnosed, the easier it is to treat. People whose cancer is diagnosed at an early stage have a much higher chance of successful treatment than those whose cancer has become more widespread.

If you have any symptoms, don’t be embarrassed and don't ignore them. Doctors are used to seeing lots of people with bowel problems.

The symptoms of bowel cancer can include:

Most people with these symptoms don’t have bowel cancer. Other health problems can cause similar symptoms.

But if you have any of these, or if things just don't feel right, go to see your GP. You may need to visit your doctor more than once if your symptoms don't get better.

Sometimes, a tumour can block the bowel, causing sudden strong pains in the stomach area, bloating and feeling or being sick. This is called a bowel obstruction. You may also be unable to empty your bowels or pass wind. If you think you have a blocked bowel, see your GP straight away or go to a hospital accident and emergency department.

There are several possible causes of bleeding from your bottom or blood in your bowel movements (poo). Bright red blood may come from swollen blood vessels (haemorrhoids or piles) in your back passage. It may also be caused by bowel cancer. Dark red or black blood may come from your bowel or stomach. Tell your doctor about any bleeding so they can find out what is causing it.

This is less common than some of the other symptoms. Speak to your GP if you have lost weight and you don't know why. You may not feel like eating if you feel sick, bloated or if you just don't feel hungry.

Bowel cancer may lead to a lack of iron in the body, which can cause anaemia (lack of red blood cells). If you have anaemia, you are likely to feel very tired and your skin may look pale.

You may have pain or a lump in your stomach area (abdomen) or back passage. See your GP if these symptoms don't go away or if they're affecting how you sleep or eat.

What else could it be?

Most people with these symptoms do not have bowel cancer, but if you have one or more or if things don’t feel right, visit your GP. Your symptoms could be caused by other common conditions that can be treated or controlled by your GP, such as:

Find out more about these conditions on nhs.uk

Keep track of your symptoms in our diary to help you describe them to your doctor.

The symptoms diary was pioneered by one of our supporters Beth Purvis and supported by Coloplast and formally endorsed by the Royal College of GPs.

It aims to help keep track of a person's symptoms before they visit their GP. This will give a good indication to their doctor whether they need further tests. Patients may not remember all their symptoms during the short appointment so having something written down can be useful.

Go to 'Visiting your GP'

Click here to read the transcript for this video. 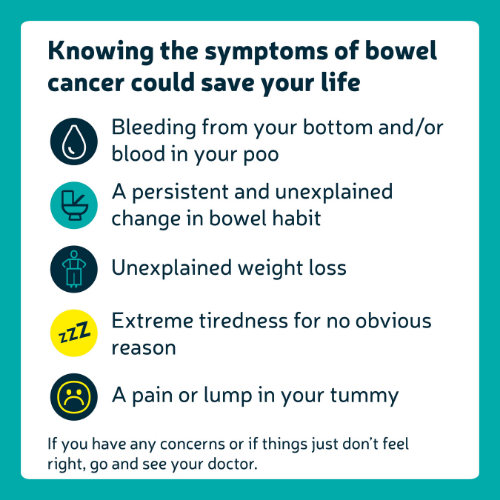 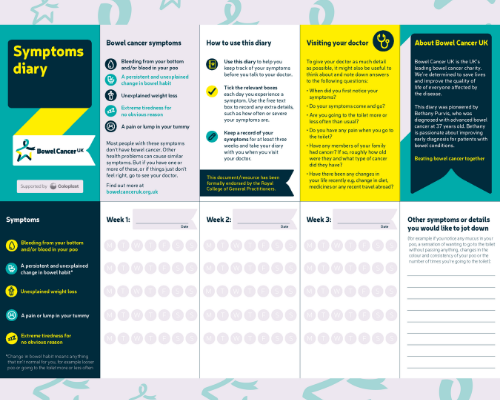