Bowel cancer is also called colorectal cancer. It affects the large bowel, which is made up of the colon and rectum.

Most bowel cancers develop from pre-cancerous growths, called polyps. But not all polyps develop into cancer. If your doctor finds any polyps, he or she can remove them to prevent them becoming cancerous.

Cancer cells may stay in the bowel or they might spread to other parts of the body, like the liver or lungs.

Facts and figures about bowel cancer

These statistics can only give you a general idea of how bowel cancer affects the UK population. They cannot tell you what will happen to you, as this depends on lots of things, like what treatment you have. Your GP or healthcare team can tell you more about your individual situation and how these statistics may affect you.

How common is bowel cancer?

Bowel cancer is the fourth most common cancer in the UK and the second biggest cancer killer.

Nearly 43,000 people are diagnosed with bowel cancer every year in the UK.

Around 268,000 people living in the UK today have been diagnosed with bowel cancer.

1 in 15 men and 1 in 18 women will be diagnosed with bowel cancer during their lifetime.

How many people survive bowel cancer?

Bowel cancer is treatable and curable especially if diagnosed early. Nearly everyone survives bowel cancer if diagnosed at the earliest stage. However this drops significantly as the disease develops. Early diagnosis really does save lives

More than 16,500 people die from bowel cancer in the UK every year. It is the second biggest cancer killer in the UK. But the number of people dying of bowel cancer has been falling since the 1970s. This may be due to earlier diagnosis and better treatment. 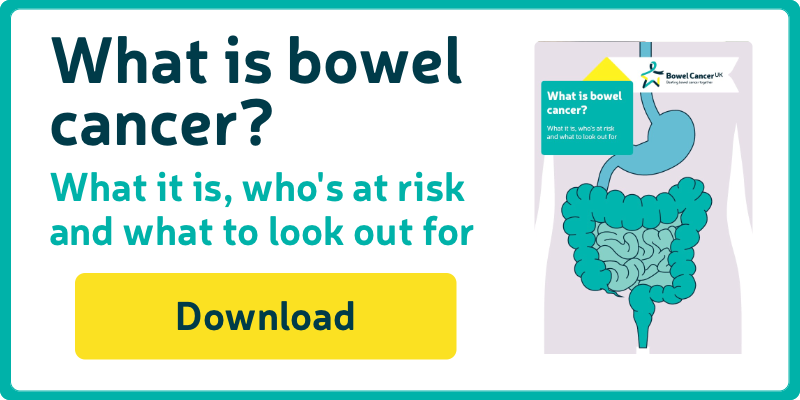