Salts Healthcare, a Birmingham-based company that designs and manufactures stoma bags, took on a fundraising challenge to walk a million steps during Bowel Cancer Awareness month, in memory of their former chief executive who recently died from the disease.

As Bowel Cancer UK links closely with what we do at Salts Healthcare, along with the recent loss of our former Chief Executive, Philip, we wanted to do our part to help out.

We asked our employees to step up to the challenge and join in with the organisation's pledge to reach one million steps in two weeks – no matter what location they were in.

From 16 – 30 April, we set out to reach one million steps between us. The Board of Directors kindly offered to contribute £1,000 to Bowel Cancer UK for the first million steps we achieved. For every additional million steps, they would donate a further £1,000 – up to the grand total of £5,000.

We knew this was a fantastic opportunity to really make a difference – simply by walking!

How did we do?

In total, 166 employees from across the business sent in their steps, as well as lots of photos of them out and about.

We were delighted to announce that we surpassed our initial target of one million steps, achieving a phenomenal 20,683,277 steps in just two weeks! To put this into perspective – the challenge generated enough steps for a walk from Birmingham to Perth in Western Australia.

"I would like to thank each and every person who took part in this fundraiser. I have been amazed by the response we received, and the enthusiasm from everyone who took part has been unbelievable! I feel so proud of how we all came together to achieve such an amazing total. I would never in my wildest dreams have thought we would get to that number, and originally we were just hoping to achieve the one million steps target." – Steve Blewer, Assistant Financial Accountant

Thanks to this remarkable team effort, the Board generously doubled their original donation, offering to give £10,000 to Bowel Cancer UK to help a brilliant cause. Bowel Cancer UK supporter Luke Piggin, who was diagnosed with bowel cancer in May 2019 at just 32 years old, joined us at our Apollo site to be presented with the cheque.

"We've been blown away by the support from Salts Healthcare with their incredible fundraiser. Every pound raised through the challenge means that Bowel Cancer UK can do more to stop people dying from the UK's second biggest cancer killer. A million thank yous to everyone who took part in the challenge." – Luke Squires, Director of Fundraising at Bowel Cancer UK

"We are immensely touched by the support of our workforce to this very worthwhile charity. Philip would be so proud of all of our employees who got involved, and we're so pleased to be able to give further help to others." – Peter Salt, Chief Executive, and Robert Salt, Managing Director 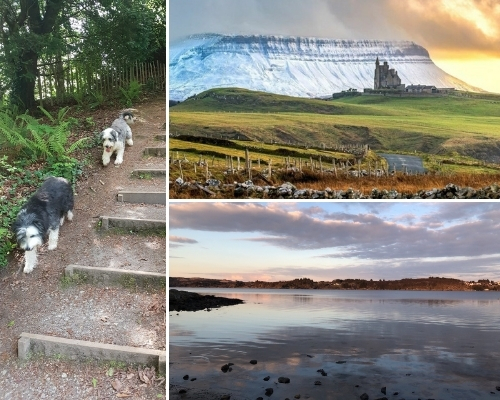 Pictured above: Some of the views enjoyed on walks. 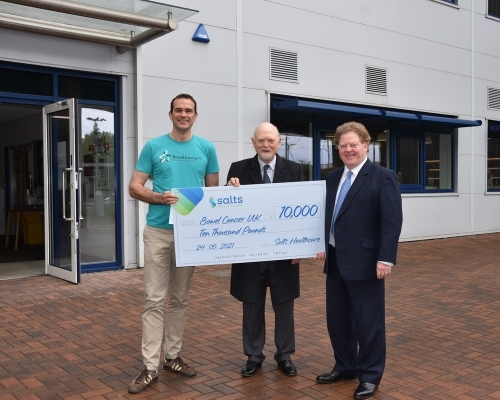 Pictured above: Bowel Cancer UK supporter Luke Piggin, who was diagnosed with bowel cancer in May 2019 at just 32 years old, was presented with the cheque.