During March of 2020, whilst balancing working from home and basking in the sun of lockdown, I was getting weekly migraines and headaches that lasted all day. To be honest, working behind a screen wasn’t something I was used to, so I put a lot of it down to that. However, after taking various medications to treat the headaches, nothing was helping and I decided to contact the doctor, who recommended I go to A&E to get checked out, due to their severity and relentlessness.

After numerous tests, it was discovered that I was severely anaemic. After two blood transfusions, and various brain scans, they were unsure what was causing the blood loss and I was sent home on iron tablets with the hope that my blood levels would continue to rise. Upon discharge, I was informed that they would be booking me in for an endoscopy and colonoscopy, as there was still the worry of where I was losing all the blood from.

During the procedures, (which to be honest, the colonoscopy turned out to be the lesser evil), a mass was found in my bowel, which they told me was either Crohn’s disease or cancer. I was not expecting that, I genuinely thought if anything, it would be internal haemorrhoids from child birth. I was in shock and struggled to believe that they were my only two options at this stage. Surely a healthy 33-year-old women wouldn’t have bowel cancer? They must have it wrong?

I remember sitting at home starting to piece everything together, all the symptoms which I had previously disregarded as insignificant niggles, now started to build a pretty scary picture. It was an agonising wait for the results, but somehow, I knew deep down what the answer was going to be.

Ten days later I was asked to return to the hospital for the results. Waiting for the consultant seemed like forever and as soon as the nurse followed him in, I knew for sure it was bad news. Those five words will live with me forever – “I’m afraid it is cancer”.

Right there and then it felt like my world suddenly fell apart. Surely this can’t be happening? So many questions were rushing through my head - am I going to die? Who will look after my kids? I just wanted them to take me down to surgery there and then and get the thing out! But cancer is a tricky blighter, it’s not as simple as that.

They were very thorough, and went through the plan, however further scans had revealed cancer was not only in the large tumour in the bowel but also spread to the liver and surrounding lymph nodes, which incidentally were in a very awkward place, next to vital veins and arteries, which would make surgery that bit more risky. The decision was made to have four rounds of chemotherapy to shrink the tumours and then operate, with a further four chemotherapy sessions to follow up afterwards.

I’m the sort of person who likes to take things in my stride and had done little to no research about chemotherapy, I think sometimes the more I knew the scarier and more real it became. This attitude had served me well to a certain extent, but knowing what I know now, there are certain things I wished I had been prepared for.

I was due to have Oxaliplatin, a chemotherapy drug designed to treat bowel cancer. Although I had met beforehand with one of the specialist cancer nurses to outline the possible side effects of the drug, for some reason I thought being young and healthy, I would breeze through with minimal side effects - spoiler alert, this did not happen!

After my chemotherapy sessions, which ran from September through to November 2020, the various scans had shown that the tumours had responded well to chemotherapy. This meant they had shrunk enough that I was ready for surgery.

Although I worried about the risks involved in major surgery and the potential of waking up with a stoma bag, I knew if it saved my life, it would be worth it.

After chemo, they can’t operate for at least six weeks, so the operation was due to take place late December/early January. This meant I was able to enjoy Christmas with the family without feeling like utter rubbish. Although I worried about the risks involved in major surgery and the potential of waking up with a stoma bag, I knew if it saved my life, it would be worth it.

My date was finally secured as 12 January 2021 (later than my consultant wanted but at least it was getting done asap!). The day had finally arrived! Covid tests done, self-isolation for 14 days done, bags were packed, kids were sorted, bowels were prepped, and I was ready to go!

Unfortunately, Covid had other ideas. We found ourselves in the midst of the second wave. The hospitals were overwhelmed and as I sat on the ward watching the clock from 6.30am-10.30am, I had a bad feeling. My worries were confirmed by the surgeon who informed me that my operation was cancelled due to having no beds available in the Intensive Care Unit for my after care. This is when the pandemic really hit home for me. I was a mess. I knew I wasn’t the only one in this situation by a long stretch, but I also knew this operation was life-saving, and the longer it was left, the lower my chances became.

They weren’t able to give me a definite date of when they would reschedule, and I literally didn’t know what to do. Going private would have been tens of thousands of pounds, and many waiting lists for private surgeons were months anyway. Luckily after speaking with my consultant that night he pushed for me to have the operation the following week. The surgery went well and my recovery was really positive.

I was then called into the hospital to meet with the surgeon to review how I was getting on post-surgery. After discussing the procedure and my healing process, he then informed me that unfortunately the liver tumour was still present from the most recent scans. This was because they were unable to ablate the correct area during surgery, despite their best efforts using ultra-sound, contrast dyes, etc, and that another surgery was required. I suddenly felt sick. It was in that moment I really didn’t think I was going to beat this terrible disease.

Since my operation in January, I had been struggling with shooting pains in my back as well as tingling and numbness in my feet, which I had put down to the effects of the epidural during surgery. However, after speaking with my consultant, he told me that these were more than likely long-term effects of the Oxaliplatin, which commonly causes ‘peripheral neuropathy’ (pain, numbness, tingling and weakness of the hands and feet) and can happen weeks, and even months, after chemo.

Due to these side effects, my consultant decided to lower the dosage of Oxaliplatin for my last four sessions, as the effects are irreversible, and he didn’t want the symptoms to worsen. We therefore decided to do 75% of the Oxaliplatin and 100% of the Capecitabine tablets, a gamble which would hopefully fight the cancer whilst not causing me any further long term nerve damage.

I have always had such support around me, but it’s the overwhelming thoughts that are constantly swirling around in your mind that are difficult to process.

After my last four rounds, it was good news! The cancer in the liver had shrunk, potentially too much to operate, so it would now be a waiting game with CT and MRI scans every three months until the tumours had grown enough to warrant a further surgery. I felt like for the first time in a year, I could breathe a small sigh of relief!

I have always had such support around me, but it’s the overwhelming thoughts that are constantly swirling around in your mind that are difficult to process. I went through phases of anger, anxiety, and frustration. There were times I didn’t want to see or speak to anyone, then other times I wanted to be surrounded with people to help me forget everything.

During treatment it feels like you’re on a conveyor belt, just trying to get through each stage, preparing for the next sucker punch, knowing that giving up isn’t an option. The constant pills, scans, blood tests, chemo and consultant meetings are draining, you almost become numb to it all and feel like you’re losing a piece of yourself with every cycle.

People will tell you how brave you are, but the reality is, you don’t have a choice. I remember reading somewhere that the hardest thing about having cancer is having kids, which I can definitely relate to. I don’t necessarily mean the physical side of parenting, which is hard and tiring, but children sense things, they hear things and pick up on your body language. I think the hardest moments were when my eldest daughter was asking if I was going to die. It literally broke me, and the reality was, I didn’t actually know. The thought of leaving them behind without a mum was my only fear and I struggled to cope with ever feeling free of that feeling. All being said, it was my children that got me through the darkest of hours, when I just wanted to give up.

I am so lucky to have the best family and friends around me and their constant support has kept me going. I’ve found comfort in speaking with people in similar situations and seeing their positive outcomes. There have been times when I’ve felt so alone in my thoughts, but I’ve learnt it’s not a good thing to bottle up your emotions and talking is key. If I can provide any advice, it’s to be open and honest and take the support that’s out there, whether that be emotional or physical.

Lastly, always try to maintain a positive mindset, despite everything, humour has seen me through this, there will always be up and downs, but take the wins when you can. Just remember…. you got this!

I have written a blog of my journey so far. It has really helped me not only process what has happened, but also raise awareness of bowel cancer, especially within young people. 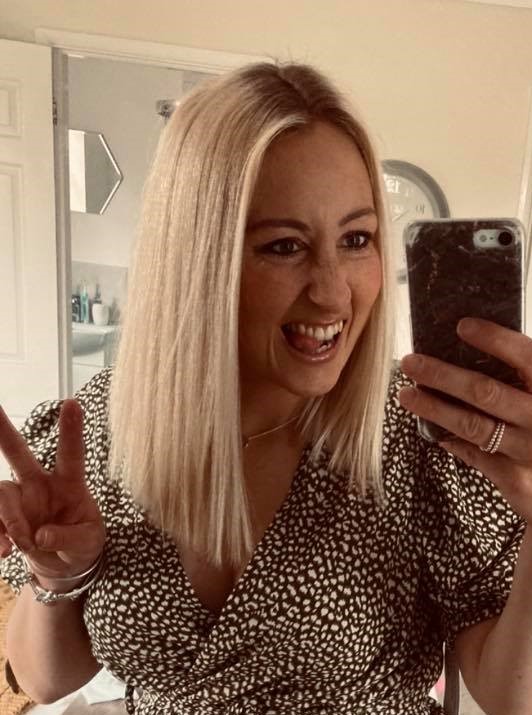 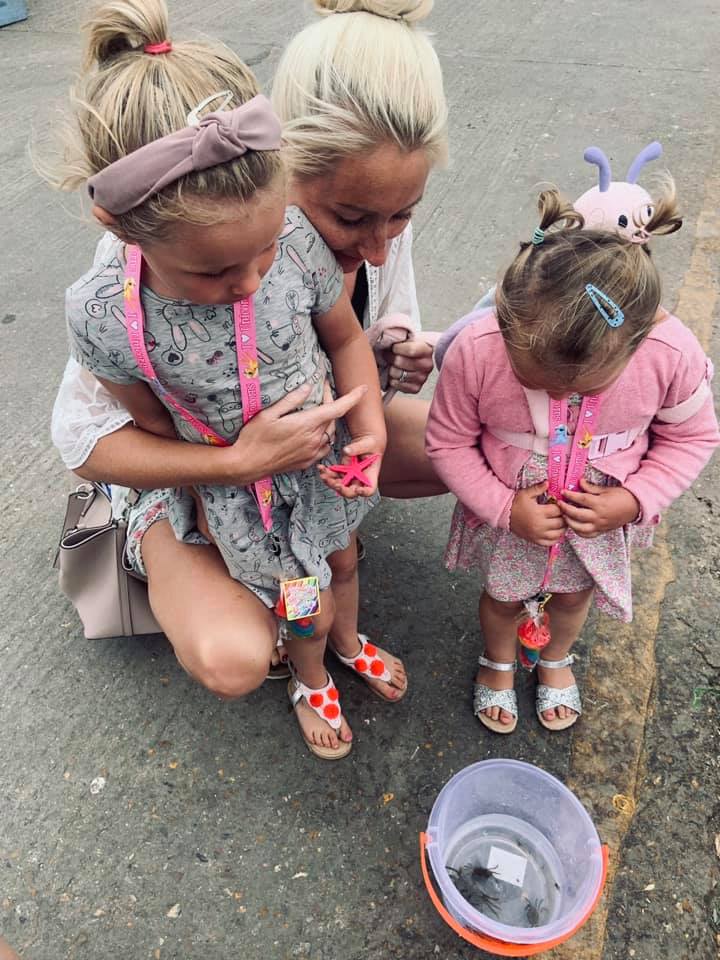 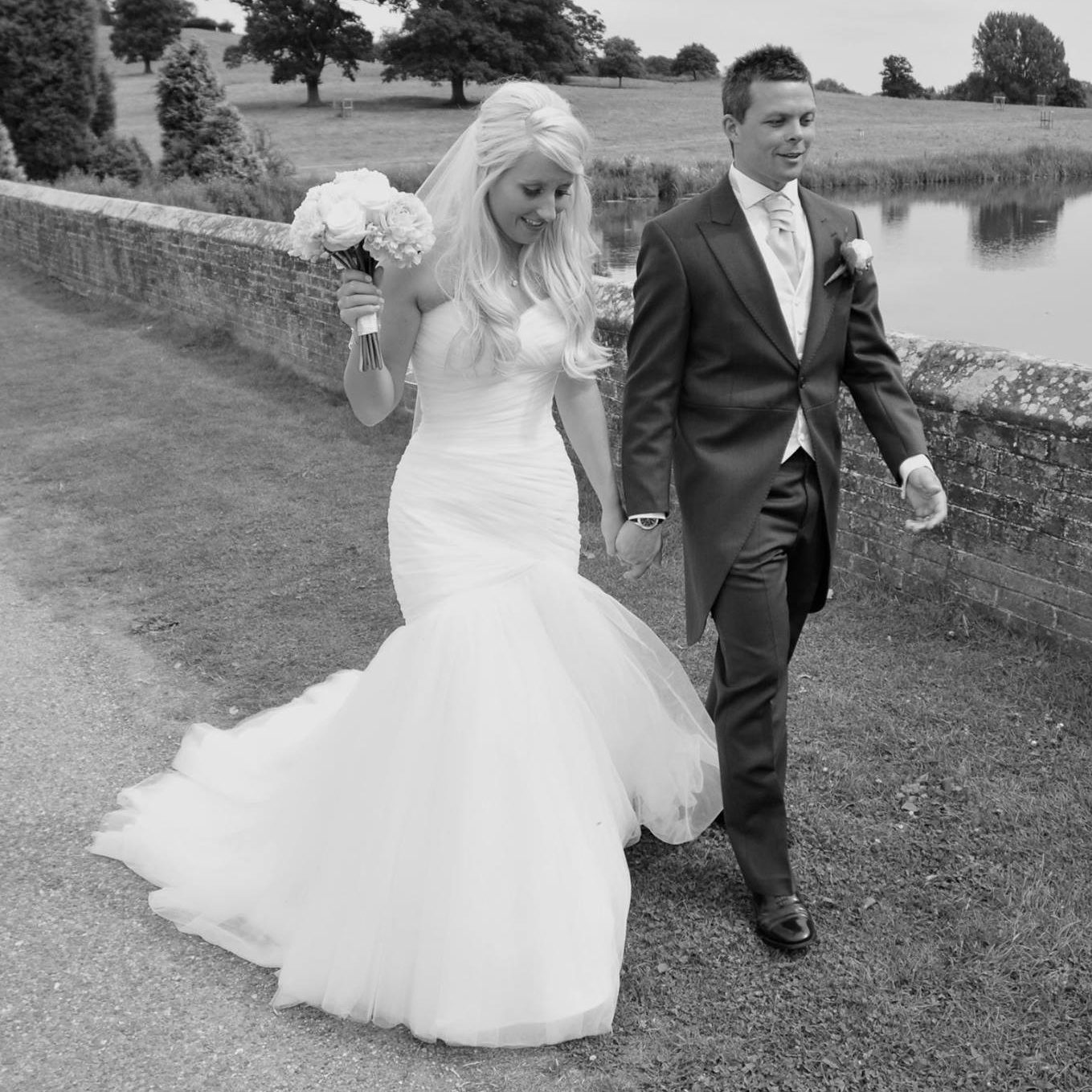