Running in memory of my father

Emma Curtis sadly lost her father in December 2019. On Sunday 12 September 2021 Emma and her friend Katie took on the Brighton marathon raising over £1,600.

My dad (Brian Curtis, known as Beast) was diagnosed with stage 2 bowel cancer in 2013. In his memory, my friend and I decided to run for Bowel Cancer UK to help raise awareness. The race was on Sunday 12 September 2021, the day after what should have been my Dad's 78th Birthday and also his 56th wedding anniversary.

We've both tackled marathons before but never in fancy dress. I was the poo emoji and Katie ran as a toilet roll! We decided on this as bowel cancer is such a horrible disease that we don't talk about enough. Unless you're a young child, we seem to be afraid to talk about poo. We hope we can play a tiny part in changing that.

The training was hard though as the marathon was postponed twice due to COVID. To add to this, during the two weeks of my longest runs, I had to isolate as my daughter unfortunately got COVID. Thank goodness for my treadmill but running 20 miles indoors is not easy, particularly whilst, Sasha and Georgie, my two daughters, kept distracting me!

The run on the day was fantastic. The crowd were amazing. Such great support. Running Brighton marathon was always going to be emotional for me. I ran it in 2011 with my late husband, Sam. It was our first marathon. Sam died in 2016 from melanoma. Whenever the marathon got tough I thought of both my Dad and Sam who would have been cheering me on if they could. I know they would both be proud of me, although I'm not sure what Sam would have said about my costume!

Bowel cancer is the fourth most common cancer in the UK and the second biggest cancer killer, affecting both men and women. Every 15 minutes in the UK someone is diagnosed with bowel cancer. That's over 42,000 people every year.

I urge anyone who has symptoms of bowel cancer to please don't be afraid to talk to your doctor they want to hear from you.

If you'd like to donate to our fundraising efforts please visit our JustGiving page. 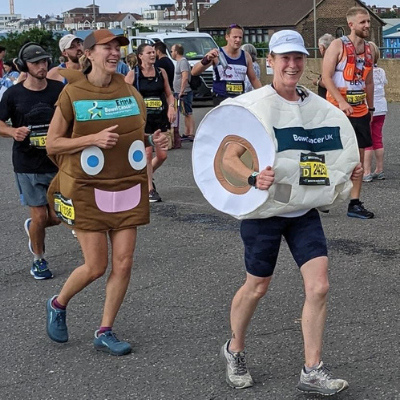