We are calling on supermarkets to print symptoms of the country’s fourth most common cancer on their loo roll packaging, to help raise vital awareness of key signs of the disease, in a new campaign launched today.

Almost half of adults around the UK could not name a single symptom of bowel cancer in a recent survey. Red flag symptoms include changes in bowel habit and bleeding from your bottom and/or blood in your poo, which can all be noticed while people are on the toilet.

Knowing the symptoms to look out for, and acting on them, can lead to bowel cancer being diagnosed at an earlier stage when it is easier to treat and even curable. Sadly, right now, fewer than 40% of people are diagnosed at the earliest stages, leading to poorer outcomes - something we have long been working to change.

Our new campaign asks customers to tweet their supermarket to #GetOnARoll by printing the most common bowel cancer symptoms on their loo roll packaging - where people need to see them most.

Marks and Spencer CEO Stuart Machin has already announced that all M&S own-brand loo roll packaging will carry the signs and symptoms to look out for, in partnership with us, from September. Toilets in stores and offices will also include symptoms posters, to raise further awareness with the retailer’s 30million customers.

M&S sprang into action after employee Cara Hoofe, who was diagnosed with stage 4 bowel cancer in 2016, suggested the idea to the Straight to Stuart scheme.

Cara says: “I recently submitted the idea of putting bowel cancer symptoms on all M&S loo roll packaging via our CEO suggestion scheme, Straight to Stuart.

“This has quickly become a reality, and I’m so happy they are putting my proposal into action – I’m hoping other companies will join us. Early detection is so important and my main message to people is don’t feel embarrassed, speak to your doctor and get things checked out.”

Our Chief Executive Genevieve Edwards says: “Seeing Cara’s idea come to life in this way is wonderful, with M&S leading the charge on this fantastic piece of awareness raising work.

“Someone is diagnosed with bowel cancer every 15 minutes in the UK, with 60% of these at a later stage when it is much more difficult to treat. Part of the problem is low awareness of the red flag symptoms of the disease that should prompt people to contact their GP.

“We would love to see all retailers join together with us and M&S to #GetOnARoll and include the key bowel cancer symptoms to look out for on their loo roll packaging. Supermarkets listen to their valued and loyal customers, and this really simple ask would help millions of people around the UK to recognise when something might be wrong, saving many, many lives in the future.”

Our new campaign is asking customers and staff to call on their supermarket to follow M&S' lead and add bowel cancer symptoms to their own brand loo roll. Find out more today here. 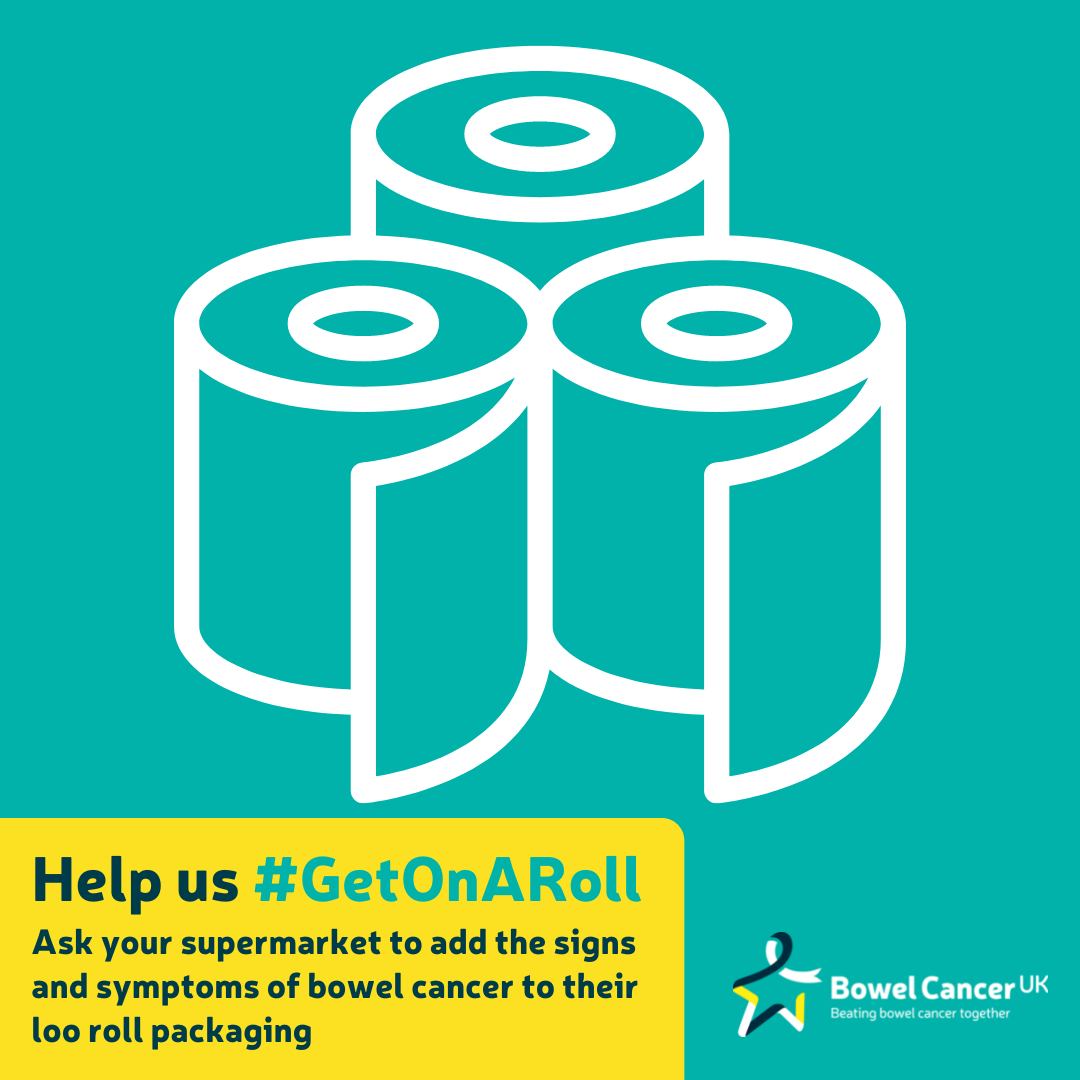