In April 2021 I visited my doctor as I had been experiencing night sweats. Once I was there my doctor asked if I had experienced any blood in my poo, which I replied yes however I had always put this down to possible piles. The doctor asked for a sample and she said "I don't think it's anything but we will send it off and see what the hospital says." Looking back now I'm so glad my GP requested a sample from me despite neither of us thinking it could lead to diagnosis of bowel cancer.

Later I went to my colonoscopy. I took the medication to clear you out and it made me very very sick. At the start of my colonoscopy they found out that the medication didn't work. So they sent me home for another week with more medication. During the second colonoscopy they found a blockage, they did say that could have been the reason the first lot of medication didn't work. They put dye on the blockage and took samples. When you are in that room on your side and you see everything the professionals see, it is a good thing and a bad thing. I knew then that it wasn't good news.

After the procedure they got my partner in the room and told me about the blockage. They then got me to have a chest, tummy and hips scan which confirmed where the blockage was and also found something on my lung. But that's another story.

I had "Bernard the alien" (as I called it) removed on 14 July 2021 at the Park Hospital in Nottingham. I was in critical care for two and half days then in a room on my own for four and half days.

On 5 October 2021, I started chemotherapy tablets to clear any small cells of cancer that remain in my blood, luckily they didn't find any cancer in my lymph nodes. I have just completed the second round of tablets and so far I've lost my sense of taste, have frequent headaches and feel sick to the point that strong smells make me sick. I also have reduced feeling in my fingers and feet and very cold hands and feet at times.

It is still early days yet as I am still in treatment. However, I am very optimistic and I don't let anything get me down if I can help it.

I could say "oh why me" but it doesn't change anything so I now say "so it was me, oh well let's get on with it. You won't get rid of me that easy or quick" and I laugh about it as you can tell my tumour had a name it was called "Bernard the alien". Everyone just laughed when I told them at work and kept saying (to my tummy) "get the hell out Bernard".

My family have also been my rock during this process and I couldn't have managed this without my partner Paul Stevenson and my parents John and Michele Hoy.

If my story helps at least one person then it has been worth it. I want to say to anyone who has symptoms to get them checked out, don't be embarrassed the doctors are used to everything. 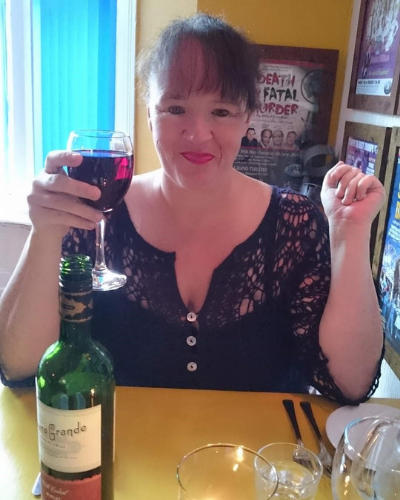