I was diagnosed with stage 3 bowel cancer in March 2020.

In December 2019, I started feeling a bit ill and I went to the GP and they said it was heartburn. My wife wasn't too impressed with this and urged me to register with a new GP. In the meantime, we went on our honeymoon and when we got back, I went to see my new doctor. They gave me suppositories, which didn't work, and by this point I started noticing a small amount of blood in my poo. I wasn't too concerned as I thought it was piles but I went back to the GP and this time they referred me for a colonoscopy.

It was during this procedure they found a tumour, and after they had finished they told me and my wife that I had stage 3 bowel cancer. I was in complete shock, I didn't even have many symptoms. To be honest, I was fortunate to have the appointment as the next day they had cancelled all colonoscopies due to the COVID-19 pandemic. I may not even be here today if I hadn't had that diagnosis.

I just about made it to the car and I broke down. We went straight to my parents' house to tell them the news, it was the hardest conversation I've ever had. That afternoon my consultant rang me to book surgery in two weeks' time. There was absolutely no time to waste.

Due to COVID-19, I had to have open surgery because there was no ICU beds for keyhole surgery. I was absolutely terrified. I don't like hospitals, I try to avoid blood tests and I definitely don't like surgery. I just remember being sick to the stomach. My wife came with me, but as soon as we got to the ward she was told to leave immediately. We said our goodbyes and I broke down. I later found out that my wife burst into tears too on the stairs outside the ward. My consultant happened to see her, and had a chat with her. He told her that I was in good hands. It was amazing that he did that.

Before the surgery, I was told that I will need a stoma and that could be temporary or permanent. I was dreading it.

As it was open surgery, it took forever and when I woke up I had a 10 inch scar. It was a success, they removed the tumour and rebuilt most of my rectum. My large colon had attached itself to my spleen. I didn't want to look at the stoma, but I'm fortunate that it was temporary. I was in hospital for nine days recovering. It was very lonely without any visitors but the nurses looked after me.

I spoke to the consultant about my lack of symptoms, and he mentioned that people rarely show symptoms until it's at a later stage. Because my tumour was so low down, I noticed some blood quite early on but if it was higher up in the colon, it would've taken a much longer time for me to notice any symptoms.

Recovery from the surgery was up and down. I had an ileus after 24 hours, which meant that my bowel had completely shut down. I was constantly vomiting for 24 hours, which is incredibly painful when you've got such a large scar. It was the worst experience of my life. I was in so much pain they put a tube down me, but that wasn't pleasant either. They were encouraging me to eat, but I just couldn't do it and after a few days I managed a piece of toast. It's amazing how you can tell when your body is open to eating again.

I never got used to the stoma. I had so many issues with it – I had to completely change my diet and I couldn't drink water but dilute it with cordial. You can't eat a lot of stuff, especially salads and vegetables.

When I got home, the recovery was tough. I got several infections and had to take a lot of antibiotics. I felt incredibly weak and very vulnerable. It takes a while to start walking again, building your strength is a gradual process. I found this difficult as I used to be in the Armed Forces, so I wasn't used to feeling like this.

After I recovered, I started chemotherapy in June. I would go to hospital to have an IV drip, followed by two weeks of tablets and then a further week of injections. I had four of these cycles. It was tough, mainly because they had me on a very high dosage. As I'm young and healthy they thought I could withstand the treatment. However they had to reduce the dosage as it was affecting my liver and I would get awful peripheral neuropathy in my feet. It got to the point that it hurt to walk round the house.

I finished the chemo in September, and had to wait a month for an x-ray to see if my bowel had healed. It looked fine, so I was happy not to have any more treatment. All I needed now was the stoma reversal.

It was originally booked for January 2021, however due to COVID-19 this was cancelled indefinitely. I was desperate for this surgery, so my friends set up a GoFundMe page and with the support of friends, family and complete strangers we raised £10,000 in two days. It meant that I could have private treatment (February 2021).

The recovery was very difficult and the first 48 hours I wanted the bag back. I was rushing to the toilet every 15-20 minutes. I was knackered as I hadn’t slept and very sore – I was in a dark place. I stopped urinating and was very worried so I went back to the private hospital. They did some tests and have given me very strong anti-diarrhoea tablets. This has worked wonders and I'm now able to sleep through the night.

I got married in July 2019, and now that treatment is over I can enjoy being married. We want to start a family, and we can now – in fact, we're now expecting our first baby. My wife has been incredible throughout my diagnosis and treatment. She's been nursing me for a year now, she certainly lived up to her wedding vows! 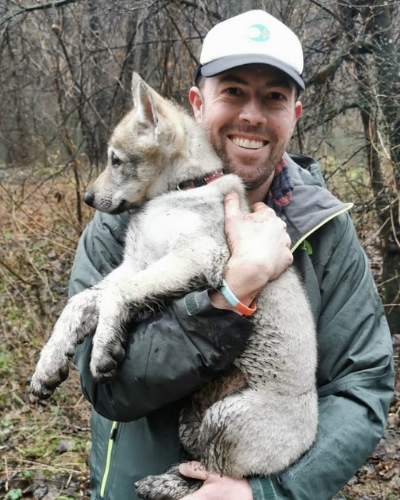 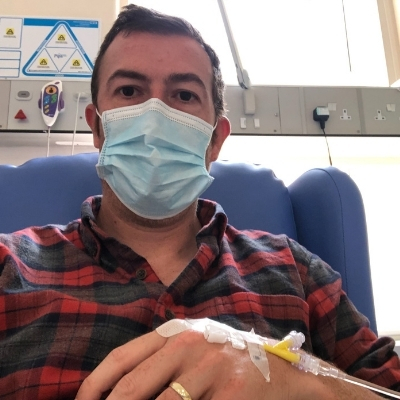