I was diagnosed with stage 4 bowel cancer in March 2015.

I felt like I was a peach being hit with a sledgehammer. I was sat with my wife in a small impersonal clinic office waiting to hear the results of my colonoscopy which I had been having regularly every two years. But these results were different I was being told I had a tumour in my colon. The consultant pulled no punches he explained that there was nothing they could do to cure my disease which was quite advanced. The consultant told me he was recommending palliative care and that I should get my affairs in order. As I stared past the soothsayer of doom through the window my mind went blank I was numb!

The consultant went on to tell me that not only did I have cancer but that it had metastasised to my liver and the tumours there were gathered around important blood vessels. The 15 minute consultation was followed by a nurse handing information in a brown paper bag. Our world was in tatters and we were absolutely adrift in an ocean of doubt, fear and isolation.

When you are told you have cancer and that you may not win the fight it brings a certain amount of things into perspective. Material things are never more immaterial and you cherish every second. Why me? I was fit. Three years before I had climbed to the top of Kilimanjaro, last year I was in Tibet at Everest base camp and Rongbuk monastery at the foot of the steps of George Mallory and Sandy Irvine. I spent a good deal of my life pushing the parameters and stretching the limits of endurance but now I had a new challenge.

After a bit of research we booked a consultation with a private liver consultant. He confirmed that he agreed with the original prognosis however he said if chemotherapy could shrink the tumours in the liver back from just one of the main arteries then he would be willing to operate. This was the chance we were waiting for.

Our initial optimism was short lived as we became disheartened with the NHS waiting times. Finally 53 days after they had found the tumour and after persistent pressuring from us we had an appointment to see an oncologist.

I started chemo at the start of May 2015 and after five and half gruelling rounds it was confirmed that one of the tumours had reduced by two thirds. On 5 October 2015 I had my liver surgery and spent six days in hospital before being discharged. I was told my liver would regenerate to about a third of its original size and should hopefully stay cancer free. The journey home was hard and I had pins and needles in my legs, hands and feet which it transpired was because I had developed peripheral neuropathy.

Within a few days I was back in the hospital with pains in my chest and shoulders. Turns out I had a collection of fluid near my liver that needed draining. I had to wait in my local hospital for a week until I could be transferred to another hospital who could carry out the procedure. I then waited four days in the new hospital for the procedure which ended up being very painful as there was no anaesthetic. After a few days the drain was removed and I was discharged home.

On Christmas Eve 2015 I met with my colorectal surgeon to discuss the tumour in my colon. The consultant informed me and my wife that I would need a full bowel resection and would need to create an ileostomy. This felt like another huge set back.

I went to a top neurologist in the New Year to discuss my peripheral neuropathy. However he was not very helpful and just confirmed what we already knew. He also said there was nothing we could do about it and that it may get worse! I felt I was deteriorating physically and mentally.

My bowel surgery took place on 2 February 2016. I couldn't speak highly enough of the staff who helped me come to grips with learning how to use the stoma bag. I finally left hospital on the 16 February 2016, a little sleep deprived but incredibly grateful to be in my own bed. After the first week I walked the short distance to the end of the drive, then the next week to the local shop and the third week I did this all twice a day while dealing with the pain of my surgery.

My next step was six rounds of chemotherapy. It was a must as the surgery had rid me of the mother tumour, 18 lymph nodes, six of which were shown to me cancerous. These took place in March 2016.

In June 2016 I had the news that they had found a protein in my blood that may indicate myeloma leukaemia and need to be monitored. Then another scan showed two small tumours on my liver. So I went to see a specialist on 28 September 2018 and underwent a procedure to remove them which went well. In November the consultant confirmed that the operation went well and there was no residual evidence of the disease.

In 2017 a scan revealed more tumours on my liver and I had to have these removed in March of that year. As of January 2018 I received three all clear scans.

On our return from the Middle East and the Joys of Oman in June 2019 we went about our normal summer activities. Then we were surprised to receive a letter asking us to go and see the oncologist. The scan taken in April 2019 in Birmingham which showed as all clear, had finally after two months been reported on in Shrewsbury and an area of concern identified in my para-aortic lymph glands, which were unusually enlarged. A further CT scan was arranged followed by a P.E.T. scan.

Another meeting with the oncologist ensued where their concern was confirmed, which was not great news as the lymph nodes are conduits to the whole body. Two of them were enlarged and one growing quite quickly, three in just three months, which indicates a strong likelihood that the cancer is returning. I signed forms for my chemotherapy to start in three weeks.

It had been wonderful to feel as normal as anyone else for almost two years and to be able to make plans. However, it was now time to batten down the hatches to get through the viciously debilitating chemotherapy, think of the positives and hope for an extension to my life in reasonable shape!

People will never understand totally if they have not been through it… films and documentaries can educate but unless you have walked in the footsteps of a 'cancer dancer' you will never really know the discomfort, pain, reduction in operation of your faculties, the fear, the depression at times and the hopelessness. You lose the sense of taste, sometimes lose your hair, feel incredibly nauseous and it seems worse for me as I cannot seem to be sick to have some relief so it's a constant state of nausea. I had forgotten 'chemo brain', but then I would, wouldn't I?

You need to have hope and faith and the love of those around you, who suffer with you! When you come through this it makes you a far more thankful and appreciative individual and you count their blessings and are grateful for the smallest of mercies.

I have been blessed to have had the last 79 months I thought I would have been deprived of, but have instead had a wonderful autumn to my life and will keep dancing with cancer as long as I can. If my story can be an inspiration and source of hope for anyone with bowel cancer, especially advanced stages that would be wonderful.

When I consider during these 79 months I have travelled to Australia and India and climbed to the Tiger's nest in Bhutan, met my new grandson Benji in Sydney, Australia. Travelled to Spain, been house sitting all over the UK, Cyprus and Dubai which also led to a wonderful tour of Oman.

Last year Dianne and I climbed the equivalent of the height of Everest and more around UK peaks raising over £11,000 for a local cancer fund Lingen Davies and Severn Hospice. These peaks included Scafell Pike, Snowdon and Ben Nevis. All the above after major operations and an ileostomy and whilst I am currently on another batch of chemotherapy, just finishing my 42nd cycle, I am still living in hope and planning for the future.

I hope my story gives people a message that through courage, positivity and hope they too can live a good life! With the support of their loving friends and family and the wonderful health professionals we have in the UK you can still lead a full life.

In the last six years I have written three books and 'Morgan the Travel' my autobiographical travel memoir gives you the full life story including my dance with cancer whilst living a life!

Thank you to all my family and friends and all the health professionals and organisations like Bowel Cancer UK for all they do and have done in bringing me and many others hope, care, encouragement and lots of loving and laughs.

Meanwhile I am still on the dance floor!

Remember every day you have a choice, make yours a positive one, think of what you can do not what you cannot.

Wishing you all the best and get dancing literally and metaphorically. 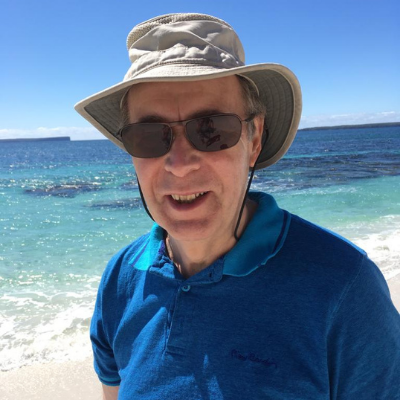 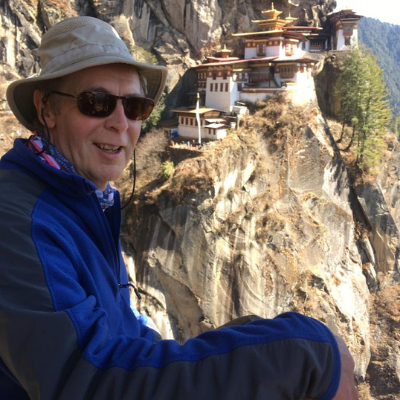 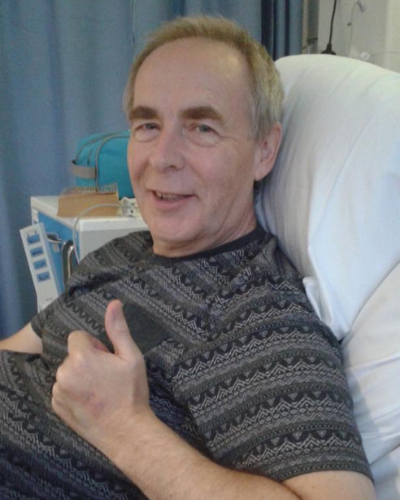