A few months prior to my diagnosis I was experiencing stomach cramps, and I had a real problems digesting my food. I went to my GP many times during February and May and they just kept saying that I had irritable bowel syndrome and prescribed medication to treat constipation. In the two weeks leading up to my diagnosis, I went to see my doctor seven times. It was never the same person twice.

I thought my symptoms could be cancer, but didn’t mention it to my GP as I knew he wouldn’t take me seriously.

I was so desperate for a medical professional to take me seriously that I went to A&E. I was in so much pain, it’s hard to describe and even imagine.

I called for an ambulance, on admission I was wheeled on a bed straight into a cubicle. There was no waiting: a nurse appeared immediately followed by a junior doctor and then a whole team of people descended taking blood pressure, putting in IV lines. I don't remember much from here but my mum, who was with me, tells me I was rushed off for different tests e.g. CT scan, X ray... and then a surgeon appeared.

He explained to me there was a shadow in my abdomen and he needed to operate urgently. He warned me I may end up with a stoma and bag and asked me to sign the operation paperwork which I did.

He then advised me to phone my children before surgery. It was at this point my mum realised how serious this was. She lent me her phone and I called my girls and told them I loved them and mummy was at hospital and the doctors and nurses will look after me.

My mum then watched them wheel me away down the corridor. I don't remember anything from admission until three weeks later. I awoke in the intensive care unit at Worcestershire Royal Hospital to my mum saying 'Hello Vicky' in a strange voice. I wondered why she was talking like that. I didn't know where I was or why I was there. I was very scared and had horrible hallucinations because of the strong drugs.

I couldn't walk because of being in a bed for three weeks and I couldn't eat or talk because I had a tracheostomy. I also had a blood clot on my lung. By week four I still didn't know why I was there (I’m sure the nurses would have told me I just couldn't remember because of the drugs) so I asked a nurse by writing on a notepad, this was how I communicated until the trackie was removed.

She immediately got a consultant to see me and he explained I had an major operation to remove what they thought was a cancerous tumour from my bowel, I had contracted sepsis which resulted in the operation being stopped while they stabilised me which took 48 hours. I then had returned to theatre to be sewn up! I burst into tears, all I heard was the word 'cancer'.

I then had to tell my family as they didn't know about the cancer. As I couldn't speak I wrote them a letter for them to read during visiting hours. I asked my nurse, who was with me all the time, if she could sit in on the visit and answer any questions that they had.

It was heart breaking handing my family the letter and watching their faces as they read my diagnosis, stage 3 bowel cancer. My surgeon came to see me and told me not to give up, I had defied all the odds so far.

Initially the team looking after me thought I wouldn’t last more than a few hours after I came to the ICU from theatre. While I was unconscious, in a world that didn't exist, my family were going through hell. The first few days after surgery they were called into hospital numerous times as my unstable condition dipped and dived towards death. It was a week of unbearable tension before the team thought I had a chance of pulling through.

Once I had regained my sanity it was a race to get well and out of ICU so I could start chemotherapy. I had to learn to walk again, which was very tough. I had to gradually build up my eating and then I eagerly awaited the removal of my trackie so I could speak to my family.

By week five I had made massive progress and was discharged at the start of week six. Recovery at home was tough, my mum supported me by helping my look after my girls, I am their sole carer, and cooking meals and cleaning. I managed to get myself well enough to begin chemo and remained cancer free from May2019.
A year later, in March 2020, my cancer returned to my peritoneum, which is the lining of the abdomen. I know this is a life limiting condition and the medical team are unsure how many tumours I have. Life expectancy is one year with chemo or two and half with surgery for which I have been turned down. But my motto is 'be the exception not the rule'. I’ve defied the odds once, you watch me do it again.

I had six more rounds of chemotherapy, which finished in October 2020. I’m now waiting for the results to see the next course of action.

Chemotherapy can be tough, I have been lucky and have found ways to manage my side effects. For my sore nose, throat and mouth I drink a Yakult a day which keeps it at bay. I take a range of supplements to support my body through chemo and also have changed my diet and exercise. My priority is making sure I’m in good health. I live a bit like an athlete with the routines I have but for me, I am training to live the best, healthiest life I can while I am not in pain. I have lost one and half stone and feel so much better for it.

Since being diagnosed with cancer my life has changed completely. The biggest change is leaving my job of 12 years as a public relations officer for a housing association. I miss my 'work family' a lot.

My partner James has been an amazing source of strength, keeping me positive and motivated to beat the disease. He has lost his own Dad to pancreatic cancer so knows the heartbreak of cancer only too well.

There are some positives to cancer – it has given me a new perspective on what is important and also an early retirement so I can spend lots of time with my kids age 8 and 15 for whom I am their sole carer.

My children are the reason I am here, they are the most important people in my life and I am so very proud of them for their bravery through this horrible time. My youngest drew me a picture of the three of us and I had it stuck to my hospital bed, which made me determined to do the physiotherapy, keep breathing and get the hell out of there!

My youngest is 8 and thinks I will get better, she deals with what she sees and currently, apart from the hair loss, I am well and you wouldn't know I am ill. She knows I have to go to hospital for treatment and can be clingy as she worries I won't come home, after all I went to hospital in an ambulance and didn't come home for five weeks. She was unable to visit me for three of those and my mum and dad had to look after her and her big sister.

My eldest is 15 so she is more aware of the situation. I am rushing her development, trying to educate her on everything an adult needs to know such as house bills, how to deal with people and a focus on her education. She is so well behaved for a teen and tells me she loves me all the time.

I have told her I probably won't be here when she is a young woman but this is the right way round and I am glad it is me and not my girls with this annoying disease. She gets annoyed with her peers when they moan about their parents not buying them the latest gadgets. She says we need to appreciate our parents while they are here. I am so proud of her, she is facing a great loss and is experiencing emotional difficulties beyond her years. But she continues to perform well at school and maintain a social circle as well as support her little sister. She truly is my angel.

I really want to say a massive thank you to my surgeon, Mr Reddy, his incredible team and the multiple medical professionals in the Intensive Care Unit at Worcestershire Royal Hospital. They have brought me extra time with my family and I will be forever grateful.

For anyone experiencing ANY painful symptoms in your stomach or bowel – go and see your GP and if you are not satisfied with their diagnosis, push, push, push for a scan. It could save your life and a planned operation is far more palatable than my experience. 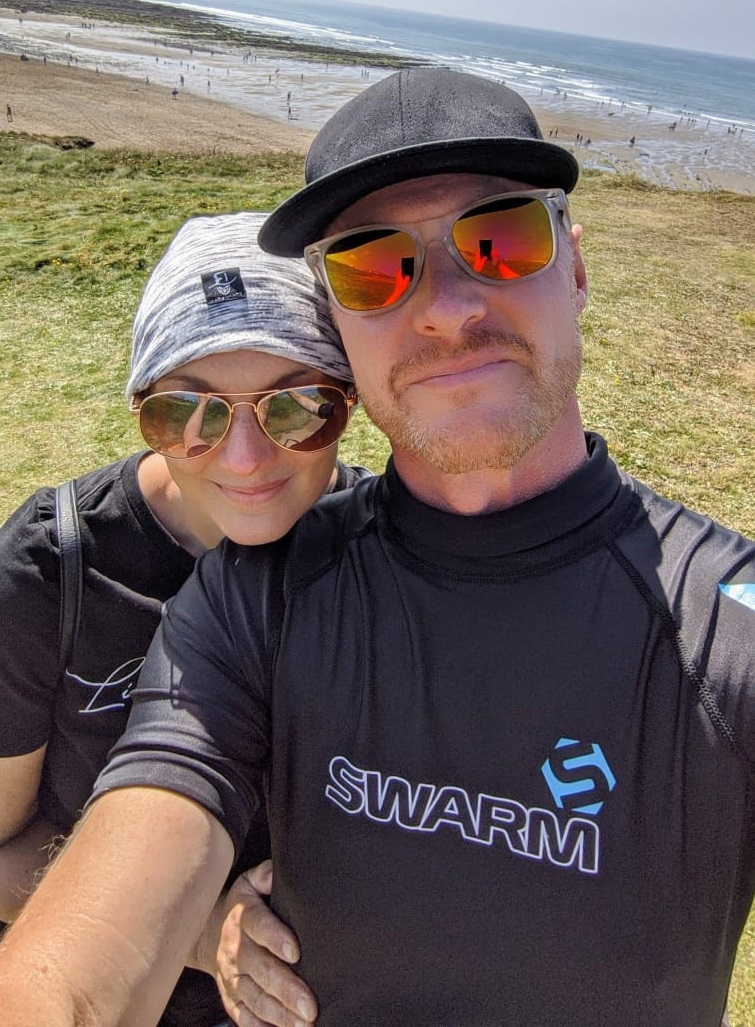