I was diagnosed with stage 3 bowel cancer in March 2019, aged 33 when I was eight and a half months pregnant.

I had had the usual morning sickness and fatigue at the start of my pregnancy and did start to feel better as the months passed and I entered the second trimester.

But soon the exhaustion came back, and I was told I was anaemic. The doctors suggested that I take iron tablets. Anaemia is very common in pregnancy so I didn't think too much of it. These tablets can disrupt your digestion so although I was experiencing diarrhoea I was told not to worry.

Despite the iron tablets, my energy levels never returned. I was exhausted and as the pregnancy progressed, and my belly got bigger, I became increasingly uncomfortable. I started finding it more difficult to eat big meals, so was snacking and grazing, but didn't feel like eating much. I thought this was just a result of the baby squashing my stomach and intestines. I was keeping track of my weight through the pregnancy and noticed that it didn't increase in the last few months as I would have expected. Yet despite all this, at the scans and check-ups my baby was healthy and growing so I didn't worry too much.

One symptom couldn't be as easily explained. I had a small bump above my big bump, which came and went. At first, I thought it was the baby's foot, but it wasn't. Then I thought perhaps it was a sort of temporary hernia, or something being pushed around as the baby moved. My midwife and several doctors were puzzled but not too worried when I pointed this out.

When I was around seven and a half months pregnant, I started getting very seriously uncomfortable. I was getting stomach pains, particularly at night. Were these trapped wind? Or Braxton Hicks contractions? I didn't know. But as the days went on, they got worse.

Eventually, I went to hospital and they saw that I was having contractions, but it didn't look like I was going into labour so they sent me home.

At 36 weeks I went back to hospital. I had always taken the bus before, but this time I was in real pain and scared. I asked my husband to drive me. I had been sick and vomited again in the waiting room at the hospital. They scanned my bump again and although I could see the contractions on the monitor, the pains were happening at a different time to the contractions. They did blood tests and when the results came back, they saw my ketone levels were high – meaning I wasn't getting enough nutrition and my body was digesting all my fat supplies. I was admitted to the hospital and I was put on a drip. I was there for four or five days as my condition was monitored and I was tested for various things. Again there was no obvious explanation. Some doctors suggested appendicitis, others a stomach bug, meanwhile checking I still hadn't started labour. Luckily one of the doctors recommended that I have an MRI scan. Here I was very lucky. MRIs are expensive, and not available at all hospitals.

By the time I had the scan, four days into my hospital stay, I had started to feel better. The drip was working wonders and I had managed to eat a yoghurt and not throw up. When the doctor came in with the results, he asked if I had any family there. I remember grinning, thinking I was going to be released, but instead he told me I had bowel cancer.

Very quickly my husband, father and brother turned up in my hospital room. They were soon followed by a stream of surgeons, stoma specialists and all kinds of medical personnel. The next day, when I was 37 weeks pregnant – the first day a baby is considered 'full-term' – they booked me in for a double operation, a caesarean section and a bowel resection. The amazing team made every effort to look after me. My husband was with me in surgery, and they ensured I could be awake when they delivered my baby. I was able to meet her before being put to sleep for the rest of the surgery. Then I had the tumour removed, whilst my husband and our baby daughter bonded upstairs.

I was fortunate that I didn't need a stoma and I loved that my daughter's birthday was now International Women's Day. She was perfectly healthy. A few days later I went home.

In the weeks that followed I got the biopsy results. I was going to need chemotherapy. But they also told me that I had Lynch syndrome, a genetic condition that makes you more likely to get bowel cancer.

The cancer had spread to my lymph nodes and I needed to have three months of chemotherapy. I had to stop breastfeeding for chemo, as my breast milk would become toxic. Suddenly stopping breastfeeding meant that in my first chemo session I needed to express milk – not something they can see often in the chemo room. The nurses kindly drew up a barrier around me but the whole thing made me quite self-conscious.

I was very lucky that I only had to do four rounds of chemotherapy. I didn't react very well to the drugs and remember in particular that feeling of getting electric shocks in my feet if I walked on a cold floor. My fingers would claw up and if it was cold or raining outside sometimes my face would freeze up. I would bring gloves to the supermarket so I could pick up frozen peas without any trouble. It does make you feel a bit weird and conspicuous when doing all this stuff. I also found that I became much more forgetful and 'zoned out' while on chemo. I told my medical team, and they reduced the dose next time. It took me around a year for my hands and feet to almost get back to normal.

I am most grateful for the enormous help and support given to me by all my family and friends. From looking after my dog while I was in hospital, my brother travelling 18 hours in a day to make sure my Mum could see us as soon as possible, to the endless deliveries of meals, biscuits and all kinds of delicious supplies made and ordered by friends. My Mum stayed with us for two months, helping with everything from nappy changes to walking my dog. It was invaluable having that extra pair of hands particularly as I was recovering, and on the days when we were inundated with visitors.

I had initially underestimated how much the chemotherapy was going to impact me, but my family all chipped in to get me help with the baby on my 'off' days. I was lucky enough to find the most wonderful Australian paediatric nurse who was unbelievably kind and made sure I rested as much as possible when she was there. It felt unbelievably luxurious being able to nap with a small baby. I can't help thinking that a few of my other mum friends must have felt just a twang of jealousy.

I've had clear scans in the two years since. In some ways I feel like my cancer story (so far) has been a series of lucky near misses – getting the diagnosis, not needing a stoma, my baby being full term and having the whole ordeal finished within five months. I'm very lucky.

I'm now pregnant again with our second child and I'm just past my first trimester, but I'm hoping this pregnancy will be a lot less dramatic. I wanted to share my story with Bowel Cancer UK because people don't associate bowel cancer with young women. I don't fit any of the usual high-risk categories, being young, female, and not drinking or smoking. But also, I want to draw attention to how all the symptoms of my cancer were masked by the pregnancy. It is difficult when looking at a pregnant woman to think beyond the pregnancy for explanations for their symptoms. I hope that other pregnant women won't do what I did for so long which was thinking 'the baby's okay… so I'll just get on with it'. 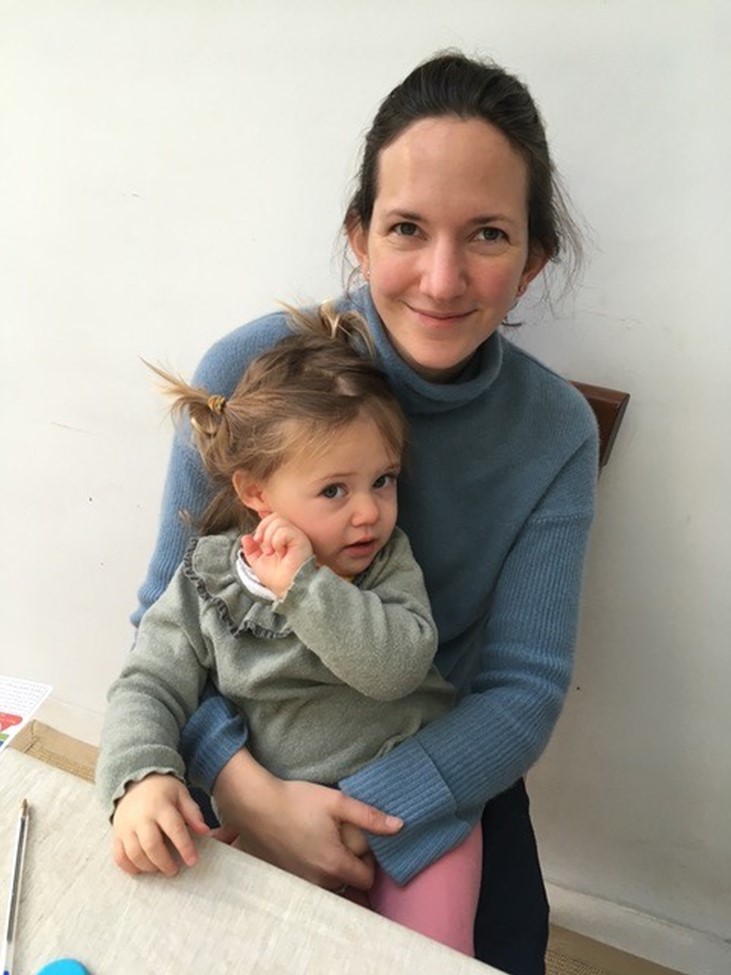